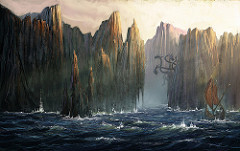 As we are now few weeks into this POC and we gave you first glimpse into it in the first post. We would like to continue and update on what are the latest developments.

However, before we come to the update. There are 2 things that we needed tell you about the setup that did not get into the first post just for length reasons.

The first thing to tell is the data structure we use as Doron explains it:

Our data is held using a single key as partition key, and additional 2 columns as clustering keys, in a manner of key/value structure:

When storing the data we store either all data for a partition key, or partial data.

When reading we always read all data for the partition, meaning:

When we need multiple partitions we just fire the above query in parallel and wait for the slowest result. We have come to understand that this approach is the fastest one.

As this meant to be the fastest, we need to understand that such reads latency is measured always by the slowest key to read. If you fire tens of reads into the cluster and If, by the chance, you bump into a slow response of one of the nodes (GC can be a good example for such case) your all read attempt is delayed.

This where we thought Scylla can help us improve the latency of the system.

The second thing we wanted to tell you about is what made this POC so easily done in Outbrain and this is our Dual DAO mechanism that Doron explains below.

The main use-case is data migration from one cluster to the other:

The dual DAO we have written holds both instances of the old and new DAO, and also a phase – a number between 1 and 5. In addition, the dual DAO implements the same interface like the regular DAO, so it is pretty easy to inject it in and out when done.

The idea here is to support gradual and smooth transition between the clusters. We have come to understand that in some cases transition done only by the dual DAO can be very slow (we can move to 5 only after no fallback is done), so we had 2 ways to accelerate it:

The ScyllaDB POC introduces a slightly different use-case. We do not want to migrate to Scylla (at least not right now) – but add it to our system in order to test it.

In order to match those demands, we have added a new flavor to our dual DAO:

Last time we have reported was when ScyllaBD was loaded with partial and ongoing data while the C* cluster was loaded with the full historic data. Scylla was performing much better as we showed.

Shlomi’s explanation is as follows:

Sstables upgraded from cassandra 2.0 to cassandra 2.1 can contain range tombstone with a different format from tombstones written in cassandra 2.1 – we had to add support for the additional format

The Scylla team figured it out and fixed it pretty quickly.More info about this issue can be found in the project GitHub.

After all the data was filled correctly into the ScyllaDB cluster, We’ve seen degrade in the ScyllaDB cluster which made it perform slightly worse than the C* (Surprise!!!!). A faulty configuration we’ve found in the C* “Speculative retries” mechanism and fixed it, actually made the C* latency about 50% better than the ScyllaDB. We need to remember we are measuring latency at its 99th percentile. In our case – as Doron mentioned above it’s while using multiple reads which is even harder.

ScyllaBD guys were as surprised as we are, They took a look into the system and found a bug with their cross DC read-repair, they fixed the issue and installed a new version.

Here is the description of the issue as explained by Tzach from Scylla: (reference to issue – https://github.com/scylladb/scylla/issues/1165)

After investigation, we found out the Scylla latency issue was caused by a subtle bug in the read-repair, causing unnecessary, synchronize, cross DC query.

When creating a table with read-repair chance (10% in this case) in Scylla or Cassandra, 10% of the reads send background queries from coordinator to ALL replications, including cross DC. Normally, the coordinator waits for responses only from a subset of the replicas, based on Consistency Level, Local Quorum in our case, before responding to the client.

However, when the first replica responses, does not match, coordinator will wait for ALL responses before sending response to the client. This is where Scylla bug was hidden.

Turnout, response digest was wrongly calculated on some cases, which cause the coordinator to believe local data is not in sync, and wait for remote DC nodes to response.

This issue is now fix and backport to Scylla 1.0.1

So, we upgraded to Scylla 1.0.1 and things look better. We can now say that C* and Scylla are in same range of latency but still C* is better. Or as Doron phrased it in this project google group:

That did not satisfy the Scylla guys they went back to the lab and came back with the following resolution as described by Shlomi:

In order to test the root cause for the latency spikes we decided to try poll-mode:

Scylla supports two modes of operations – the default, event triggered mode and another extreme poll-mode. In the later, scylla constantly polls the event loop without no idle time at all. The cpu waits for work, always consuming 100% per core. Scylla was initially designed with this mode only and later switched to a more sane mode of operation with calls epoll_wait. The later requires complex synchronization before blocking on the OS syscall to prevent races between the cores going in/out sleep.

We recently discovered that the default mode suffers from increased latency and thus fixed it upstream, this fix did not propagate to 1.0.x branch yet and thus we recommend to use poll-mode here.

The journey didn’t stop here since another test execution in our lab revealed that hardware Hyper Threads (HT) may increase latencies during poll mode.

Yesterday, following our tests with and without HT, I have updated scylla configuration to use poll-mode and running only on 12 physical cores  (allowing the kernel to schedule the other processes on the HT).

Near future investigation will look into why poll-mode with HT is an issue (Avi suspects it’s L1 cache eviction). Once the default, event-based code will be back ported to the release, we’ll switch to it as well.

This is how the graphs look today: 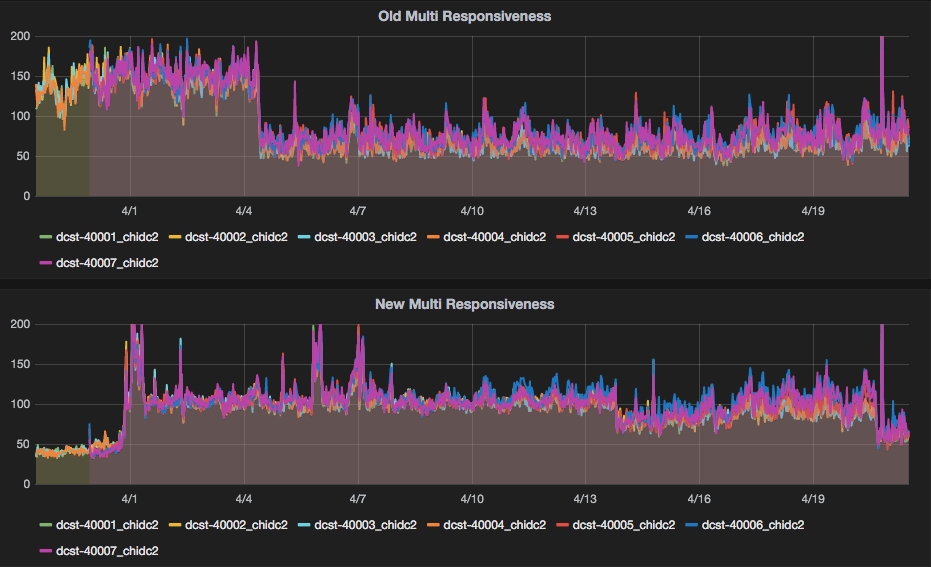 As you can see in the graphs above: (Upper graph is C*/ Lower graph is Scylla)

There is a lot to learn from such POC. The guys from Scylla are super responsive and don’t hesitate to take learnings from every unexpected results.

Our next steps are:

That’s all for now. More to come.

Next update is here.