What Is A/B Testing

The choice of what to test depends on your goals. In Outbrain each configuration is called an A/B test variant. The idea of Outbrain’s A/B testing is to allow publishers to test two different designs of their widgets, and measure which design had better Click Through Rate (CTR) and Revenue Per 1,000 Impressions (RPM) performance.

In the core of the system there are more than 450 settings that define the configuration of each widget, which is installed on a blog or a group of sites.

There are more than two hundred online settings that directly affect the widget. Each of these settings can be tested within A/B test variants. For example, one of these online settings is called “Widget Structure”. This setting configures the look and feel of the widget. 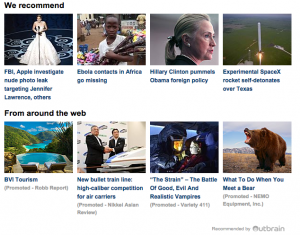 Widget structure – look and feel of the widget 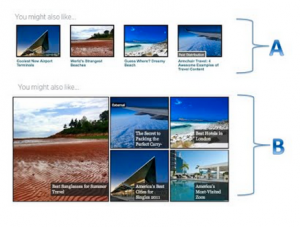 Even though each A/B test in our system is unique, there are certain widget settings that are usually tested for every variant:

Once you decided that you want to create a new A/B test, you can do it using an internal tool named Wabbit – Widget A/B testing tool. The tool gives you the ability to create/edit an existing A/B test or to pull internal reports with Key Performance Indicator (KPI) performance for the test.

The A/B test can be defined on a specific widget on one site or it can be done on a group of sites that use the same widget.

When the test ends, we pull the A/B test report to measure which configuration had better performance. If the data indicates one of the configurations is an improvement according to our KPIs and the test has experienced enough traffic to be considered significant, we give the option to apply the new configuration as the default for the widget.