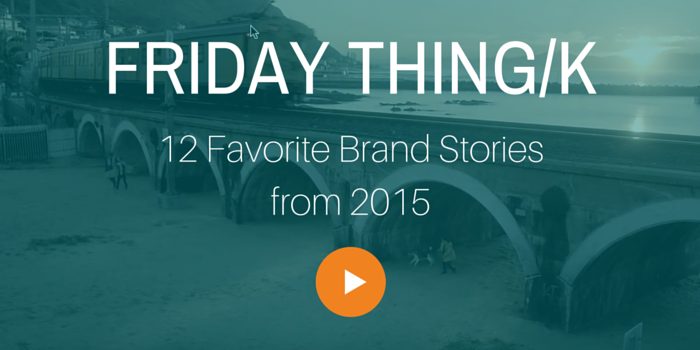 Thank you for dropping by.

My name is Yoav.

Try to say it. Now try again. It doesn’t matter, I’ll answer anyway. You can just call me Joe, which is also my coffee name, or Yoey.

a brand storytelling canvas where I’d like to share with you smart, creative, inspiring, engaging, cool, and innovative content marketing ideas that take my digital marketing breath away once a week.

I love stories and storytelling, who doesn’t.

After all… the world’s a stage and all the men and women merely players.

Borrowed from William Shakespeare’s, it is the theme of this promotional film for the BBC’s 2015 season of drama. Benedict Cumberbatch recites Shakespeare’s famous “Seven Ages of Man” monolog in one of the best TV promos I’ve seen.

Luckily I’m working at Outbrain, where my colleagues and I assist brands looking to take their content to the next level, pushing the boundaries of storytelling on a global platform.

I’m crying but it’s not because I have something in my eye.

What can I do, I’m just a content-sensitive guy.

And all of that from watching an ad.

I know that it’s an ad because the last frame tells me so, and the YouTube title does as well. But I don’t care – or maybe I should say, I actually care a lot about this beautiful, well acted and filmed tale.

One of the thing/ks I liked the most from last year was this beautiful music video that tells the memories and stories of one house over several years as a family grows up there.

The house is for sale and this ‘music video’ is actually a real estate listing — the branded film was made for Norway’s largest financial services group DNB by creative agency POL.

I absolutely love it because I think it demonstrates that anything can be ‘storyfied.’

You just need to be creative.

In a list of top 10 worst arguments ever with my wife, seven are related to IKEA items being built, two for drilling holes in the wall, and one for when I lost my wedding ring in a surfing lesson. A new argument emerged last February about mounting the TV onto the wall. Personally, I don’t know why it can’t stay on the table!

As a reference to how I should go about installation, she sent me a video that one of her friends, Shalom, posted on Facebook who lives in L.A. and has a business for TV installations.

In the video, he shows how to mount a Tv in 35 seconds. NO WAY I can do it, but Shalom did create a simple, yet powerful piece of content marketing.

It has everything we talk about with the big brands and agencies: it educates, adds value, inspires, and engages. The fact that it was shot with a mobile phone and uploaded without any ‘Pixar-like’ editing or effects just adds to its credibility, increasing audience trust.

So complicated, so simple – and I’m so not going to try it at home.

Throughout generations, people have wondered how cranes that build high-rise buildings get built themselves.

Looking at those gigantic machines, we think to ourselves:

Basically, the biblical chicken and egg question. And many have gone their entire lives — some passing away- without ever knowing the answer.

My daughter popped the crane question the other day. Afraid for this moment, I did what dads do and very quickly changed the topic.

As I went on unable to sleep the nights following, I knew this vicious cycle of uncertainty had to end.

So I YouTubed it.

I ended up finding a video that was produced by San Marco Cranes, an Italian company that sells cranes around the world. Turn on the music (or mute it if you’re not into 80’s disco) and unlock one of the biggest secrets of the universe!

That’s the idea behind popular game Scrabble, and is also the creative concept behind this love story by American toy manufacturing Mattel.

It’s the emotions it brings. It’s the sadness, happiness and sadness again. It’s the love. It’s the photography. It’s the landscape. It’s the ocean. It’s the subtle credit at the end to the brand that made it possible.

This one is about content seeding — literally. And I mean literally…literally.

With a creative concept built around the fact that books come from trees, Argentinian publishing company Pequeño Editor developed a hand-stitched children’s book made from acid-free paper, ecological ink and jacaranda seeds, as part of a project called, Tree Book Tree.

After reading the story, kids can plant the book in soil and it will grow into a tree. The project was designed to teach kids 8-12 where books come from (not the iPad).

All the way from Australia’s ANZ Bank, this short film created by ad agency Whybin/TBWA Melbourne and directed by Oscar-winning New Zealand director Jane Campion (“The Piano”) is a beautiful and important branded video which supports the bank’s equality Initiatives.

And you are going to smile again in few seconds.

An amazing brand service brought to you with a smile.

It has everything ‘ads-y’ about it.

If I had been pitched this creative concept or read the script, I would have thought the premise sounded a bit forced: boy meets a girl…they fall in love… oh, and there’s also a bubble gum.

For crying out loud, the product appears six times during this 1:57 min video, and ends with the narrator pretty much sealing the deal that it’s an ad!

But once again, I don’t care! It’s a beautiful film. It’s an emotional story that I want to watch again.

That’s ‘Engagement 101,’ and how you create an impact on/for a business.

And that song — an amazing cover of Elvis’ “Can’t Help Falling in Love.”

Cut to when you fall in love with a gum commercial.

I wish I could hide the name of the brand behind this touching film, only to be discovered at the end. But, alas, find what is behind the curtain via this amazing video content.

12. December, Clash of Clans: Legend of the Last Lava Pup

Christoph Waltz and James Corden star as the storytellers of “Clash of Clan,” a True Tale of Clash Achievery via the online multiplayer game.

For a complete reel of every video mentioned above, view the entire playlist on Outbrain’s YouTube channel.

Feedback is more than welcome, and needed so please leave comments below. Additionally, if you have any thing/k in mind, I would love to discover it.

See you next Friday.