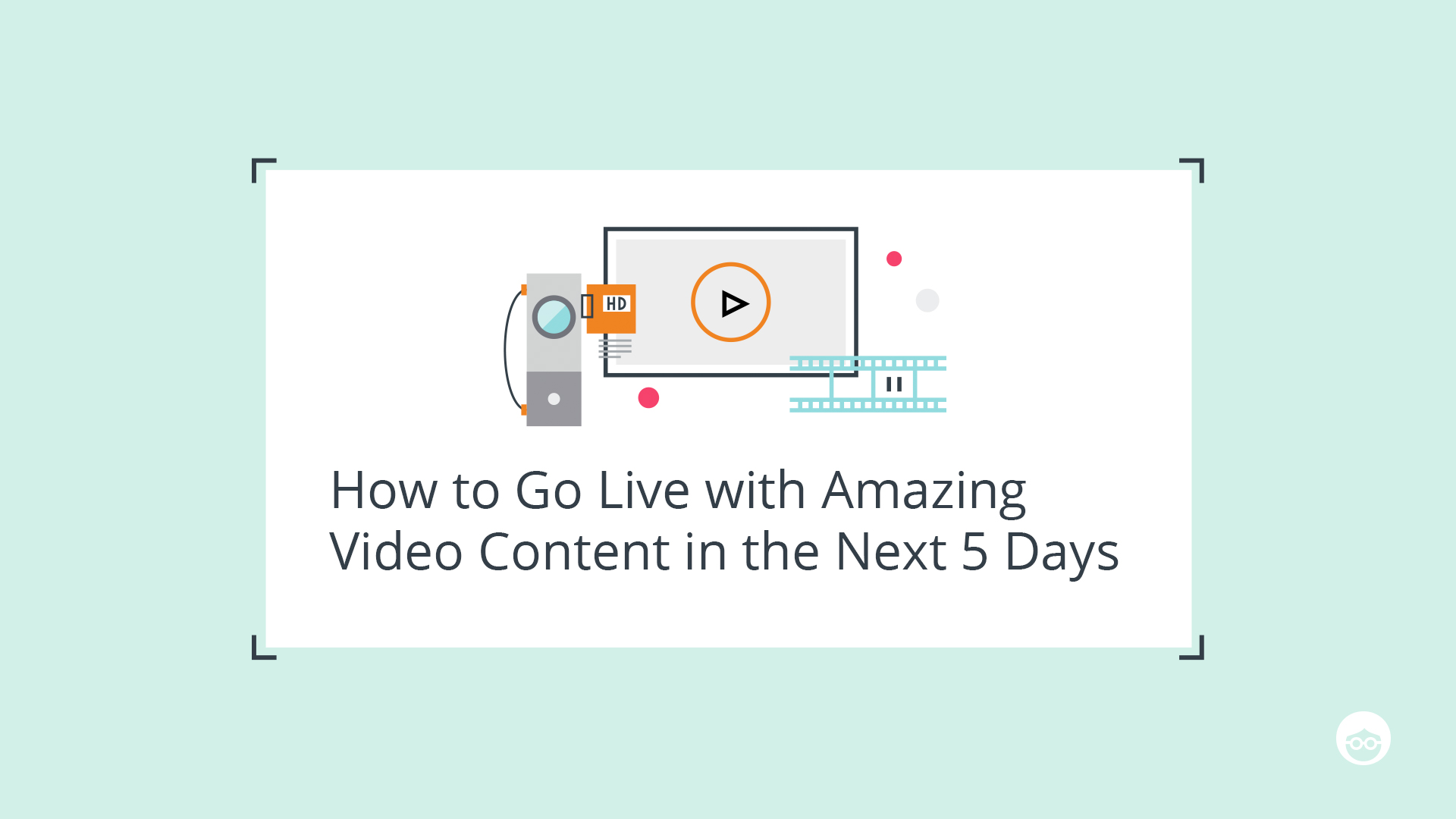 For the past few years, video content has reigned supreme.

Videos are shared more than 10 times as much as other content, and can almost double conversion rates on a landing page.

However, there’s a new frontier of video marketing, and everyone is racing to conquer it first. If you’re a business, you need to figure out how to use live video.

But there’s an obstacle to everyone just getting into live video finds. While live video seems more approachable than traditional video — you can do it with just a smartphone and a Facebook account — it actually takes as much, if not more, preparation to do right.

Once you’re live, you are no longer in complete control.

Fortunately, with proper preparation, you can go from having no idea how live video works to running a successful campaign in five days.

The number one nightmare scenario with live video looks like this:

You go live, thousands of people are watching, and you have nothing to say. You stammer, maybe grab a random coworker and try to make some banter, but you know it’s going poorly. People start leaving, and the ones who stick around turn on you quickly.

There’s an easy way to prevent this.

Decide on a reason for going live. People overcomplicate this step. They think they need to be skydiving with a celebrity while answering audience questions for people to care.

It doesn’t have to be complicated, and if you’re just starting out, it shouldn’t be. What’s the feature of your product that people ask the most questions about? Do a live tutorial of that feature, and then do a Q and A at the end.

You could go live at the same time every week using that same basic format—picking a different feature, of course—and that would be a successful live video campaign.

That’s all it takes to provide value to your audience and leverage the interactivity of live video.

There are several platforms to stream live video through these days, and that number is just going to grow. Every platform has different advantages, for example:

To me, the best way to choose between these platforms is not to choose: I use all of them simultaneously.

There are two ways to do this:

The secondary benefit to streaming to multiple platforms is that you’re protected from any failures on an individual platform’s end. For example, when BuzzFeed had an exclusive interview with President Obama and Facebook Live failed, they lost 20,000 of their 35,000 viewers in the scramble to restart the stream on YouTube Live.

Day 3: Buy Yourself Some New Toys

Getting high-quality video and audio is a product of using the right equipment.

To get higher quality video, do the following:

To get high quality audio, buy yourself some better mics. Some iOgrapher bundles come with booms (the torpedo-looking microphones you see on movie sets), or if you have particular needs, you can buy different kinds of microphones fairly cheap off Amazon.

If you have no budget at all, use a headset at the very least. Even the headphones your iPhone comes with making a huge difference in terms of audio quality.

Day 4: Tailor Your CTA to Your Platform

This can be as passive as getting them to share the archived video, or it can be as aggressive as asking them to buy a product. Your CTA should reflect the platform you’re broadcasting on. For example:

In general, it’s important that your CTA fit the platform you’re using. It’s hard to incentivize sharing on YouTube since it’s not by nature a social platform in the way Twitter or Facebook are. Similarly, Instagram Live makes it tricky to sell products by not allowing links in your video or caption.

Earlier I said the number one nightmare scenario with live video is that you go live and embarrass yourself in front of a huge crowd. While that is the worst-case scenario, there is another common situation that is almost as bad:

You go live, execute your plan flawlessly, and provide a ton of value. Everything is working out exactly as planned until you go to answer audience questions and realize no one is watching your stream.

If a live stream is shot in a forest, and no one is online to hear it, does it make a sound?

The fix for this is simple — tell everyone in your audience you’re going to be going live before you do. There are a lot of different ways to do this:

However, you can reach people, do it. Announce when you’ll be going live, what platform you’ll be doing it on, and what you’ll be talking about.

But What If Only 10 People View My Stream?

Your first stream probably won’t be massive. A lot of people go live once, only get 10-20 viewers, and quit on it forever. All of those people are opting out of the future.

You have to keep streaming.

Consistently hitting your audience with live video on a dependable schedule is without question the greatest way to create raving maniac fans.

Even if you only have 30 people show up to each stream, 30 loyal, committed fans can generate an incredible amount of word of mouth marketing for you. As your weekly (or whatever schedule you pick) streams happen, they will invite others. Your archived videos will attract more viewers. Slowly but surely, your audience will grow.

As your audience grows, it won’t just be people with a passing interest in your product. It will be people who love your brand and want to share it with the world, and those are exactly the sort of people you want to connect to.

David Basulto is the founder of iOgrapher and author of Life. Camera. Action. Basulto became a first-time entrepreneur at the age of fifty-one, and he now spends his time helping individuals to create Hollywood-quality films on mobile devices, developing new products, and spending time with his wife and nine-year-old son.