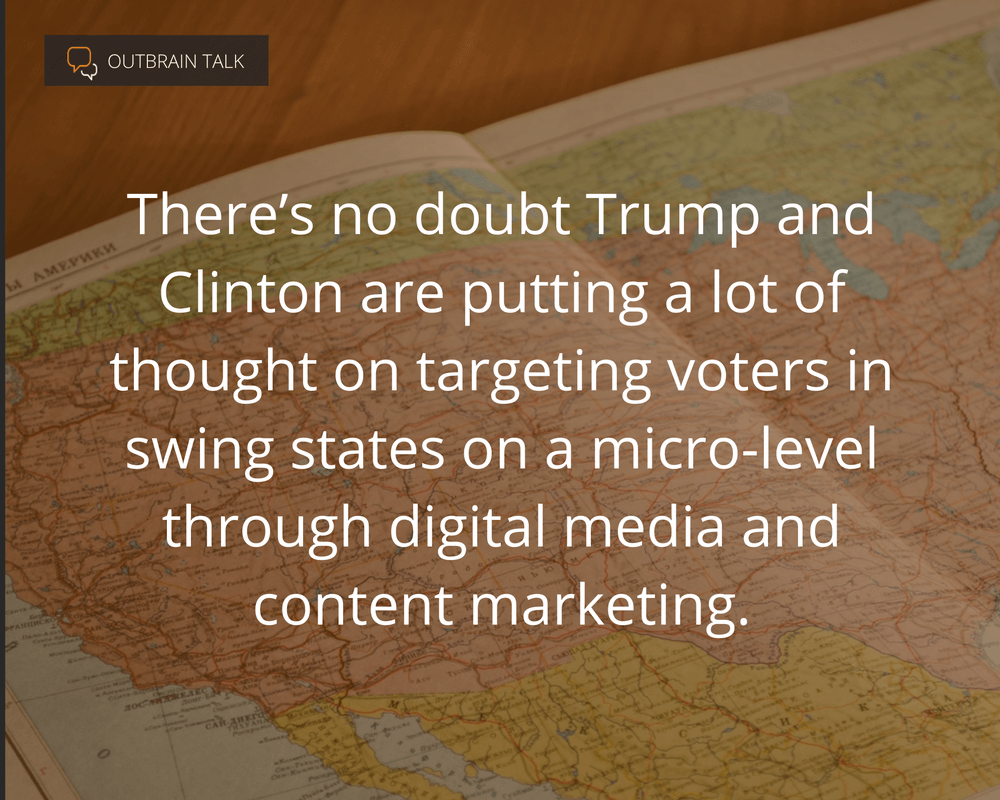 Swing states. Colorado, Florida, Iowa, Michigan, Nevada, New Hampshire, North Carolina, Ohio, Pennsylvania, Virginia, and Wisconsin – in this contentious election climate, the pressure is on to win supporters and target demographics with traditionally low turnout to make it out to the polls.

While Trump and Clinton continue to rely on traditional marketing – newspapers, radio, and TV – to communicate their message to the masses, there’s no doubt they are also putting a lot of thought on how to target voters in these swing states on a micro-level through digital media and content marketing.

Additionally, with Clinton now in such a substantial lead, senate is again up for grabs in these key states, two years after Republicans took majority control. Both sides may also be looking to digital targeting to boost their messages.

In fact, if we learned anything from Obama’s 2012 re-election, it was that data and micro-targeting was essential to his victory. His analytics team built up a voter file that included demographics, voter history, and a number of other data points – for example, what magazines and media they consumed and if they donated to charitable organizations. His team then used this information to tailor messages to key segments. To young 18-24 year olds, African Americans, single women in swing states, and Latinos, the message was to register early and get out and vote. Meanwhile, Republican supporters were hit up with negative Romney messaging to reduce turnout from that group.

Micro-targeting has grown even more sophisticated since Obama’s 2012 campaign. For example, Outbrain recently rolled out its own zip code targeting feature. With this feature, political organizations now have the potential to use Amplify to boost owned content such as blog posts and earned content, such as op-eds. The potential of this is huge, given that our research shows that audiences exposed to a viewpoint on an issue were 88% more likely to have a positive perception of that viewpoint.

This aligns with recent Pew Research on the modern news consumer as well. Although social media garners a lot of hype, 36% of online news consumers get their news from professional outlets. Moreover, consumers place as much trust as the information they get from news organizations as they do from family and friends. Additionally, although 62% of adults get news on social media platforms, just 4% trust the information they get a lot.

The race is on. As the candidates continue to tailor their message state-by-state – and town by town – we’ll have to see what sticks and if Clinton continues to maintain her substantial post-DNC lead.

Interested in learning more about targeting content by zip codes? Email politics@outbrain.com to see how Outbrain can help.