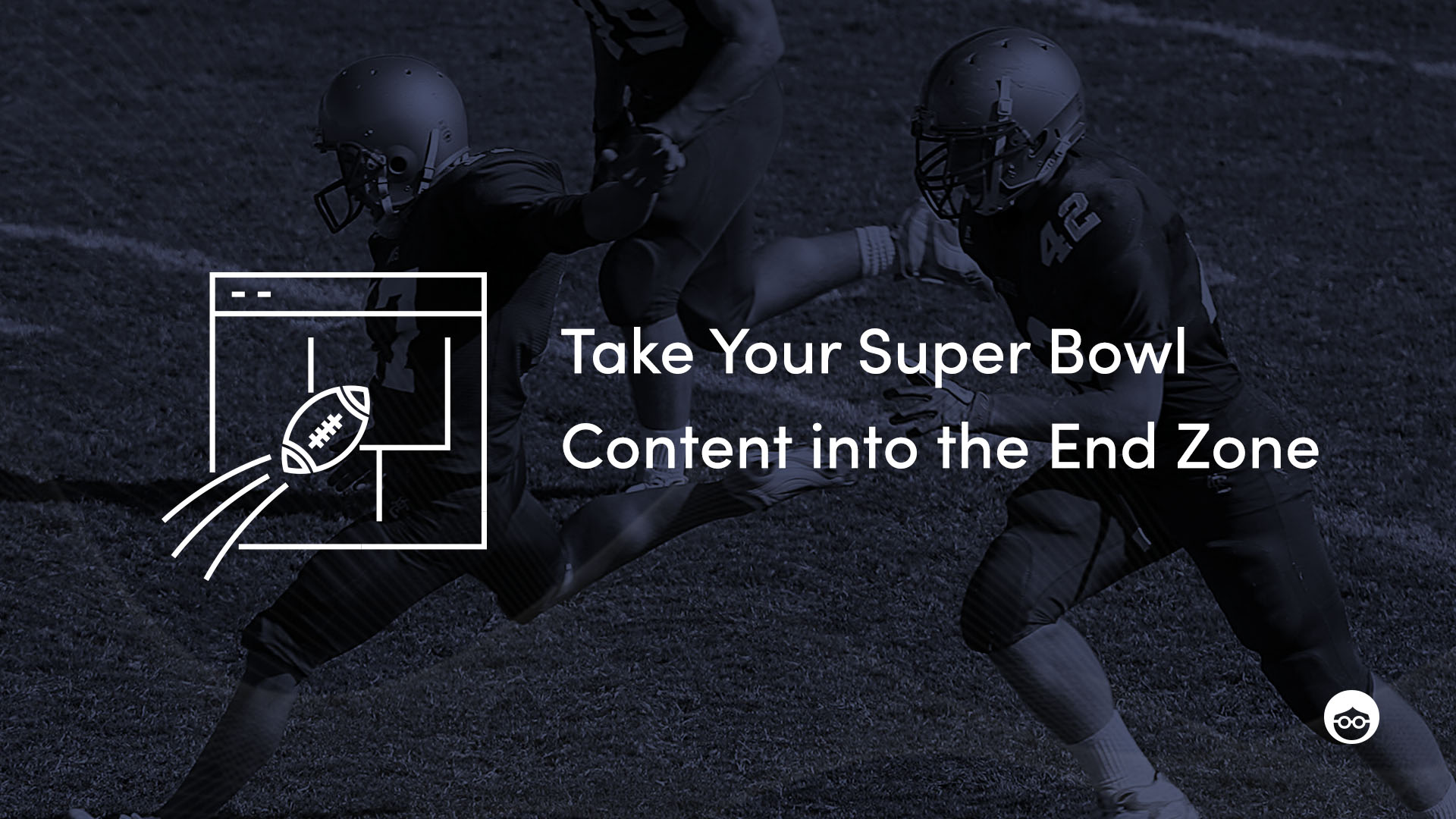 Whether your audience is made up of football fanatics or enthusiasts of celebrity gossip, the Super Bowl presents a dash of excitement for almost everyone.

And while viewership of this iconic event can fluctuate from year to year, the consumption of web content related to the game continues to grow exponentially.

According to a recent Nielson study, 68% of U.S. homes tuned in to Super Bowl LII, which digitally resulted in over 170 million game-related interactions on social media. With that much buzz, you can’t afford to miss out on this short, yet critical, time window to connect with your target audiences online.

Even so, understanding how and when to capitalize on this momentum is no small task. The attention span of the modern connoisseur of digital content can be as elusive as the Vince Lombardi trophy itself.

It might be tempting to post your content as far in advance as possible in the hopes of reaching your audiences early, but patience here is key. Web traffic trends for the 2019 Super Bowl indicated a distinct lull in user interest throughout January before drastically spiking both on the day of the game and several days following.

To put it into numbers, impressions of recommended Super Bowl content on the open web skyrocketed by over 300% on game day and gradually tapered off over the subsequent three or so days, as seen in the chart below. 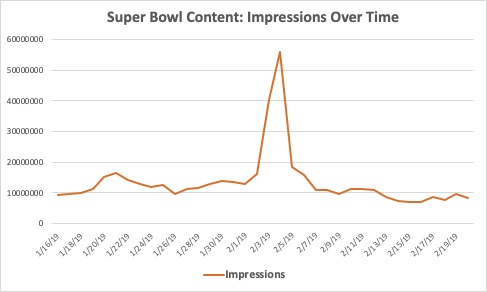 💡Brainy Tip: Take advantage of campaign scheduling tools and set your content to run during times of peak interest. No matter the platform, launching campaigns at least one week ahead of the peak period is vital to gaining momentum (and building audience pools!) before the big day. With tools like Outbrain, you can even strategically set budget pacing options that can deliver your content as efficiently as possible throughout the duration of your campaign.

Sure, on its face, the Super Bowl conjures up musings of football, tailgating, and good old fashioned team rivalries. That being said, it might surprise you to learn that the top-viewed content surrounding the event actually focused on the activities of players off the field, particularly when it came to relationships.

In fact, digital ads that featured narratives about well-known players, such as Tom Brady or Julian Edelman, and their romantic partners, actually fetched the highest overall CTR compared to other Super Bowl content.

But that’s not all! Engagement further increased by 33% when an image of the couple was included with the content, as opposed to just a picture of the player himself.

💡Brainy Tip: Craft content that highlights the most prominent “it” couples of the season, especially if they’ll be featured in the big game. This is a great opportunity to A/B test different images in your ad variations and gauge which creative style best aligns with your audience base.

Bear in mind that fascination with the Super Bowl often transcends beyond the score of the game. Case in point: with over 117 million viewers in 2017, Lady Gaga’s halftime performance actually eclipsed average viewership of the game itself!

Similarly, of the top-performing ads from the 2019 Super Bowl, not one focused on the action or even the final outcome of the game itself.

On the flip side, content associated with halftime performances and game day celebrity sightings constituted over half of the top ad engagement. Headlines that promoted rankings or listicles of past halftime shows also demonstrated a noticeably higher CTR.

💡Brainy Tip: Explore digital platforms that enable you to experiment with a diverse range of audience targeting options. Don’t be afraid to get creative with different interest or attribute segments, as this will go a long way in ultimately understanding what targets best resonate with your content. For instance, platforms such as Outbrain permit advertisers to drill down into user affinity groups like Entertainment, Celebrities, Music, and much more.

Once interest in the event begins to ramp up, your target audiences will soon be flooded with online media dueling for their attention. This is the time to distinguish the components of your content and stand out from the rest of the pack.

Consider this: headlines that blatantly called out the inclusion of images, listicles, or rankings on the landing page accounted for 70% of the top Super Bowl-related ads of 2019.

💡Brainy Tip: Give your audiences a sneak peek of what they’ll find if they click-through to your content’s landing page. Incorporating eye-catching callouts can convey a clear value proposition and quickly allow your content to stand out amongst the digital noise. Test out varying snippets of text, such as [Pics] or [Gallery] early in a headline for maximum viewer effect.

You’ve done all the heavy-lifting: witty headlines, striking creatives, and perfectly tailored audiences. But have you considered where your game-time targets will be surfing?

If you need a quick reminder, unveiled trends by eMarketer indicate that media consumption on mobile devices increased by 47% between 2014 and 2019. Additionally, the same study indicated that 2019 will be the first recorded year in which consumers watch more content on mobile than they do on TV screens.

But, how do these trends impact your Super Bowl content? Just as the eyes of the consumer are increasingly shifting towards their mobile devices, so too are those watching the titular game of the season. Interestingly, despite reporting a decline in those watching the 2019 Super Bowl on TV screens, CBS actually recorded 20% YoY growth in regards to users tuning in to the event on the network’s mobile streaming app. With that level of engagement, you can almost guarantee that your audiences will demand mobile-friendly content to match!

💡Brainy Tip: Keep the mobile experience top of mind when designing your content. Don’t forget: your landing page experience matters, so sending traffic to a non-responsive page on your site can prompt frustrated users to quickly bounce. Take operating systems into account as well, as you could discover, for example, that Android users are more receptive to your content offerings compared to those on iOS. Also, if your audience suffers from a chronically short attention span, keep mobile headlines short and sweet so as to avoid getting cut off.

Still not entirely sure where to start? At Outbrain, we provide you with the tools you need to find your perfect audience and effectively promote your content across the open web.

Hop into the dashboard to start optimizing today or, if you need some extra coaching, contact us to help you get started.

Mike is a Marketing Manager at Outbrain, primarily focused on the U.S. region. Previously, he worked in both client-side and agency roles, spearheading strategies related to paid media, SEO, and content marketing. In his spare time, Mike enjoys trying to maintain a balance between an active lifestyle and eating far too much Chicago deep-dish pizza.