In our look at hundreds of native advertising experiences that sprung up in the last year, we found that for the most part, the overall quality of the content improved between 2013 and 2014.  But authenticity, transparency and editorial value continue to be areas for improvement , with quite a few native ads coming up a little short in at least one of those departments.

Questions over its definition and standardization aside, there were still a number of impressive native advertising experiences to hit the web this year. The jury’s still out on whether audiences en masse believe native delivers on the hype, but they may yet come around with exposure to more experiences like the ones that made our list. 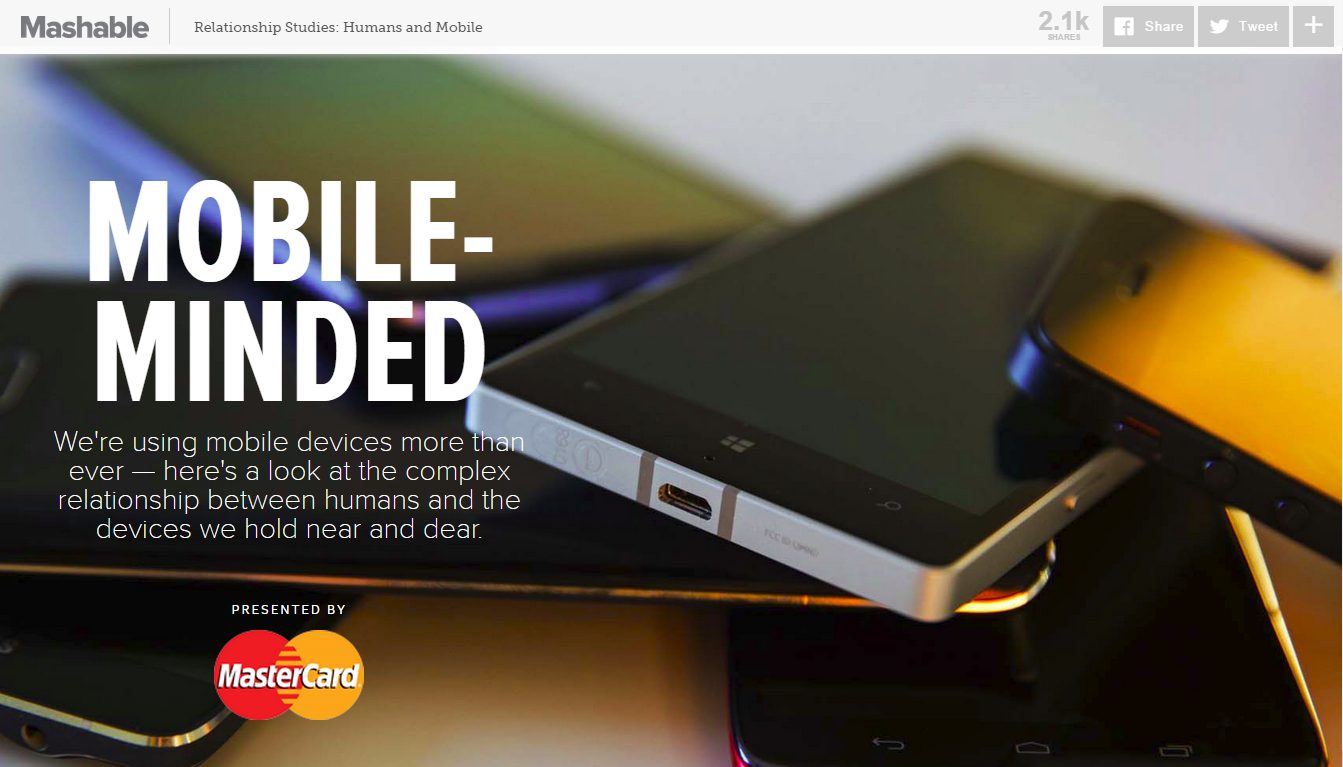 This Mashable and Mastercard collaboration is noteworthy for taking a well-documented topic like the Rise of Mobile and applying a fresh take. The piece uses a number of data visualizations to paint a comprehensive picture of our personal connection to our phones, but the infographics don’t overwhelm the story — they just highlight different facets of it.

In fact, for all the content about mobile to hit the web this year, “Mobile-Minded” ranks as one of the most immersive instances. Slight cringe at Mastercard’s self-nod in the post, but the value of the piece far outweighs any self-serving tendencies.

If Mastercard’s goal is to change the perception of its brand as a credit card company to a technology company, more pieces like this can go a long way toward achieving that goal. 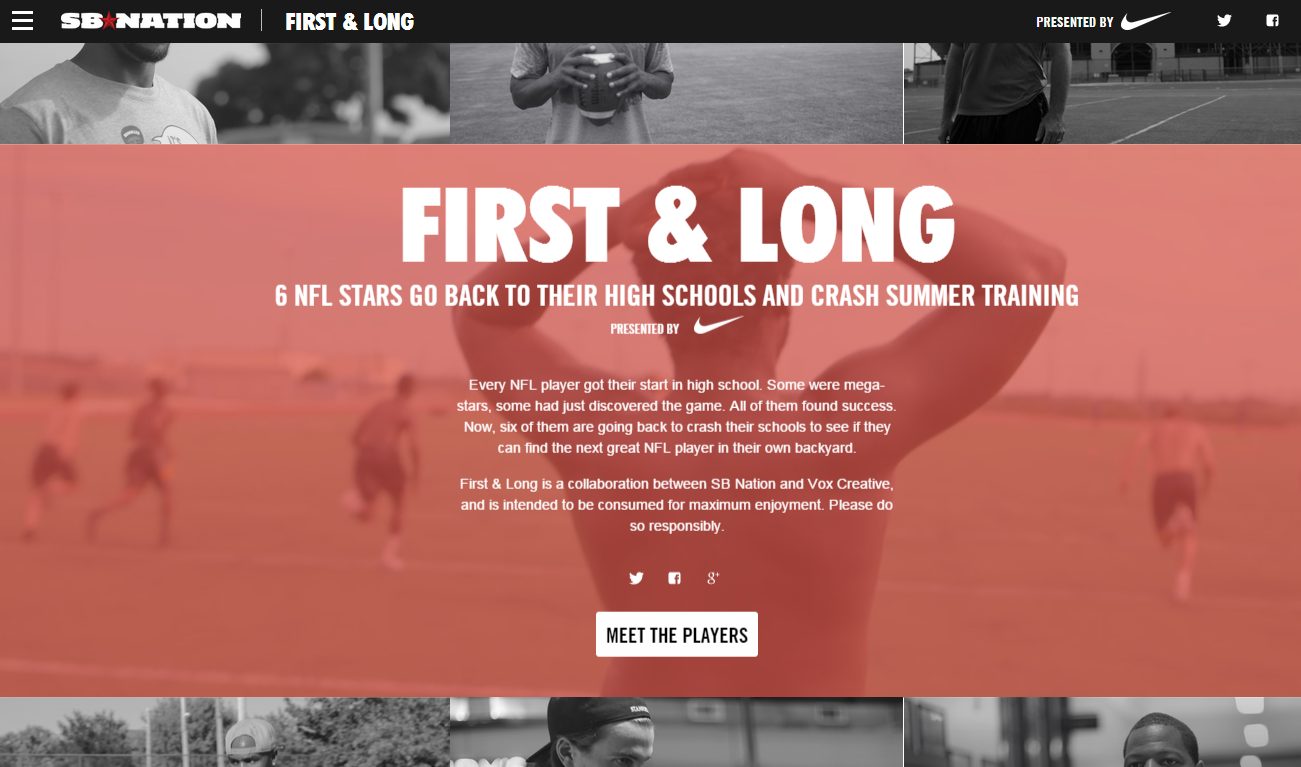 Six pro football athletes crash football practice at their old high schools and dish some much-needed advice; the ensuing video series is the creation of SB Nation and Nike. In addition to the longer video segments documenting the pro athletes’ visits, the videos are accompanied by shorter “hype” clips designed to motivate any student athlete.

Where this particular collaboration scores extra points is in its interactivity. Users can sign up for a “pep talk” in the form of a text from one of the six players featured in the series.

Nike might not need to do things like this to continue owning the sports world, but the fact that they do is what makes them Nike.

The Lunar Footprint (by Thrillist & GE) 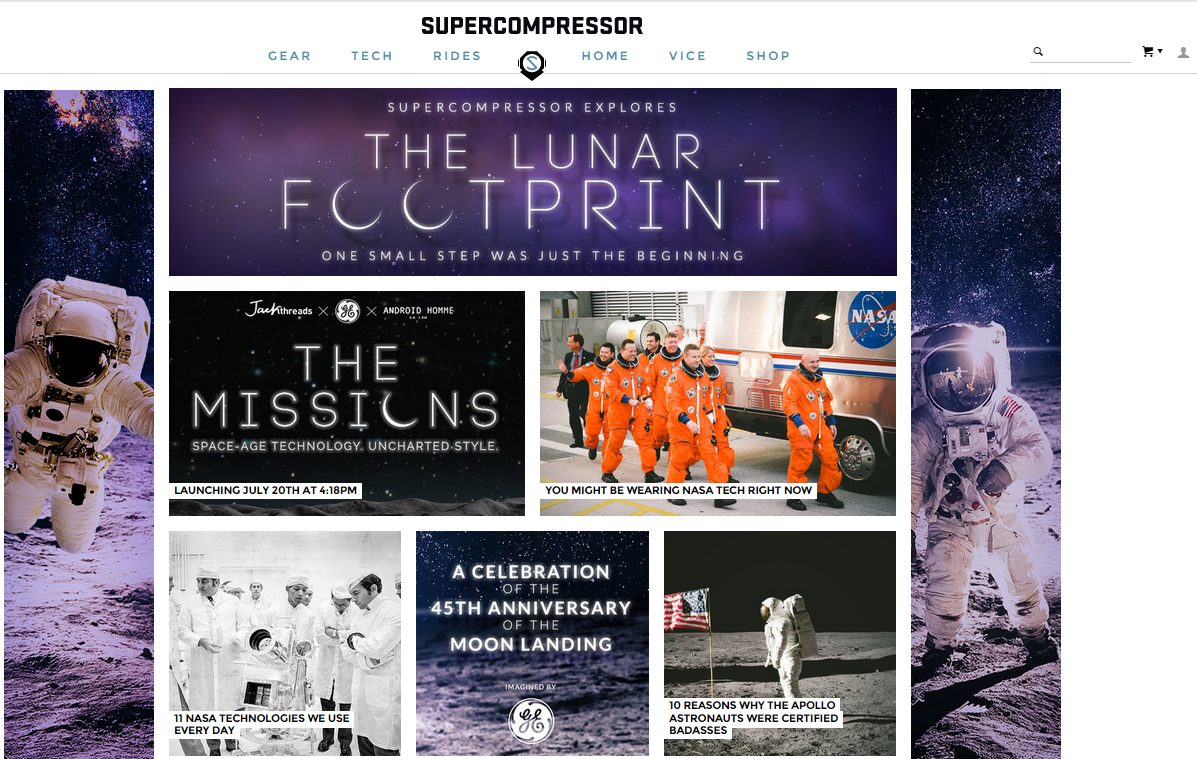 Thrillist partnered with GE to throw a 45th anniversary bash for the moon landing on their tech/gear site Supercompressor. The collaboration was noteworthy for a few reasons.

For one, the Lunar Footprint  reinforced GE’s other branded content efforts to position themselves as a leader in innovation and technology; it is one piece of a larger puzzle, not the whole puzzle, an example of a brand thinking strategically about how to leverage a native partnership to tell the brand story they’ve already invested in telling.

Second, where, outside of this GE and Thrillist collaboration, did you hear about the 45th anniversary of landing on the moon? Probably not many places. For one reason or another, it was observed in relative quiet in the media. GE ended up with an even larger share of a real-time conversation than they were probably bargaining for, all due to planning.

Their timing came at a particularly curious moment in manned space-flight: as government backing continues to recede from space programs, businesses are increasingly trying to fill the void. The results might be decidedly mixed to date, but GE clearly sees an opportunity to lead in that frontier and is trying to signal a passion for exploration and innovation with content like this.

Perhaps the most significant implication for marketers, however, is that  the partnership resulted in a whole pop-up publisher experience, with  several pieces of content to explore, not just one — something we expect to see from more native partnerships in 2015.

Two Engineers Have Created the Perfect Doll Every Girl Should Be Playing With (by Mic.com & Cole Haan) 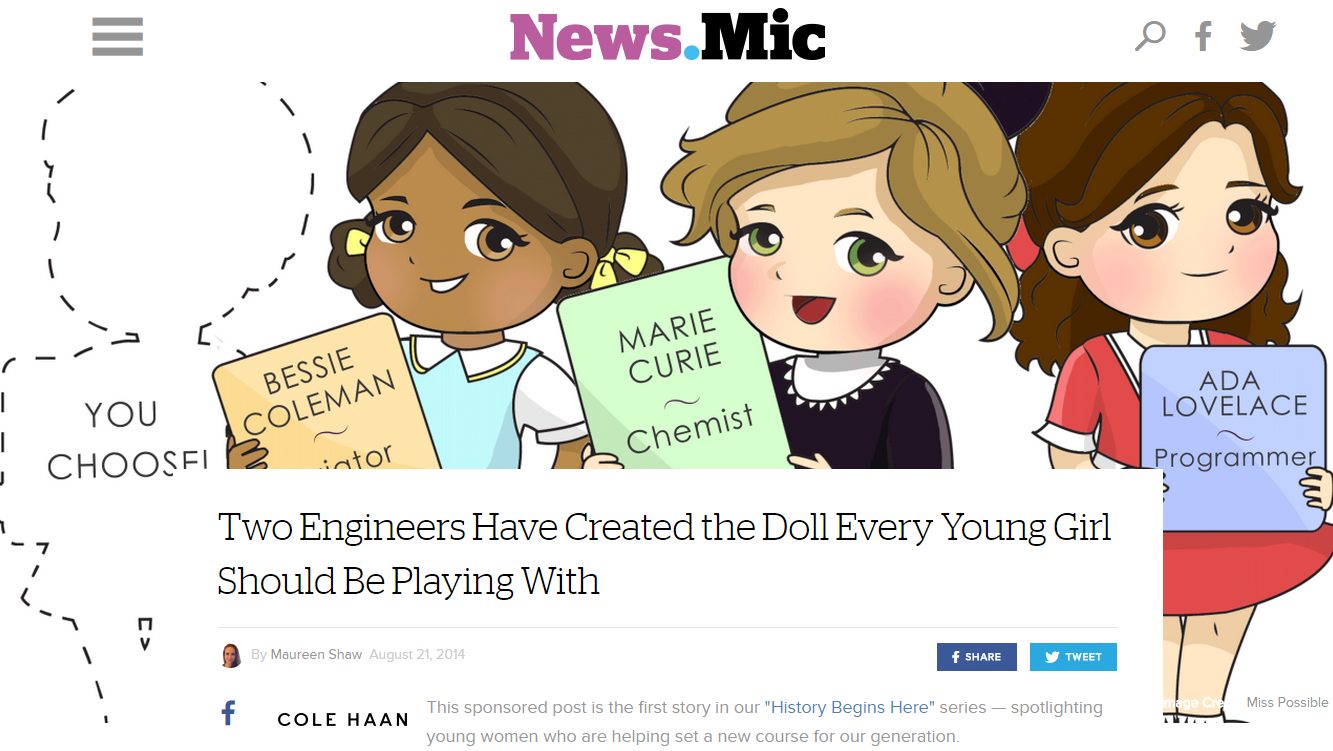 Cole Haan is another example of a brand leveraging a native partnership to help expand a content universe they’ve already invested in creating. Their “History Begins Here” series takes many forms, including stories on their own blog, but the partnership with Mic.com resulted in some particularly cool stories that garnered significant social engagement, with many pieces averaging 30K social shares (most of them on Facebook).

We could have chosen any number of stories from “History Begins Here,” but we like this one in particular because it demonstrates a brand selflessly stepping aside to let other people share an empowering story for the next generation of science & tech innovators, one that no doubt matters to Cole Haan’s customers. 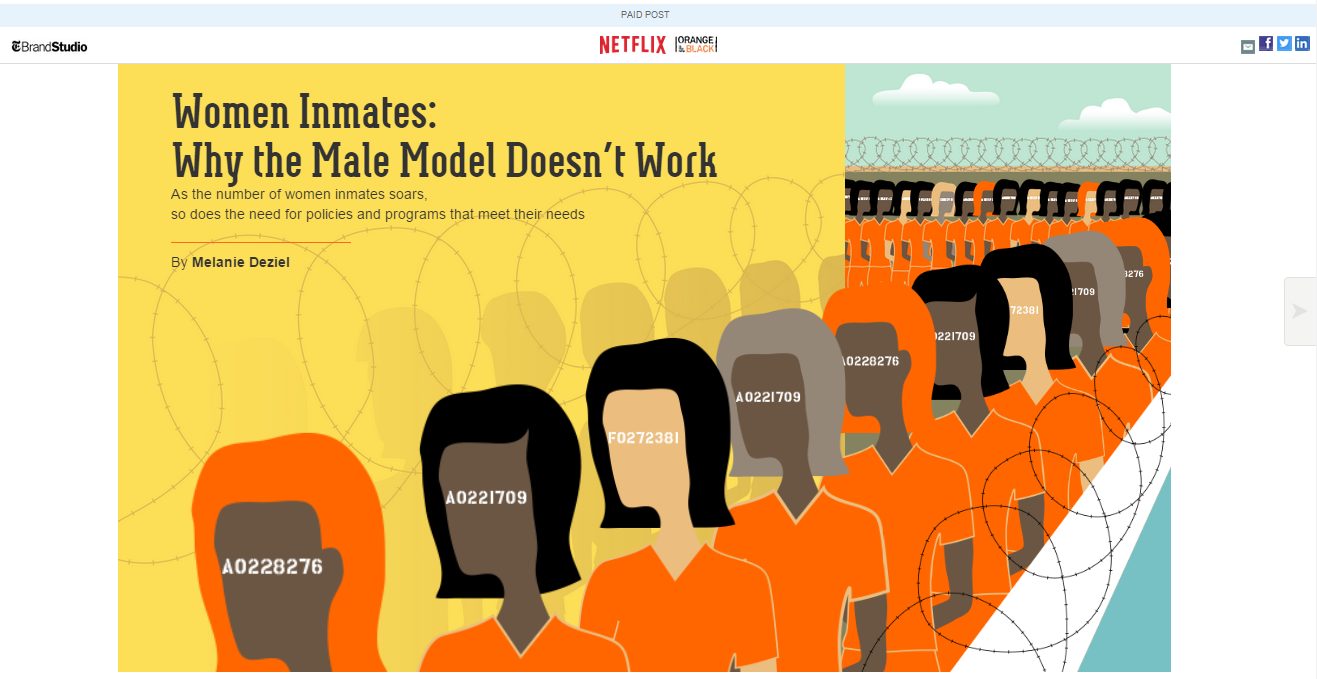 This New York Times/Netflix collaboration is worthy of all the praise it received this year, and then some. The content is so rich, immersive and well-researched that its obvious association with Netflix’s hit show Orange is the New Black takes a backseat altogether. What we’re left with is a model approach to native advertising, in which the brand plays benevolent sponsor of an urgent story that might not have made the pages of the Times otherwise. It’s a documentary-style approach that adheres pretty closely to the Times’ particular brand of investigative journalism and thus satisfies all constituents: Publisher, advertiser, and most importantly, the audience.

What’s Next in Native?

A common thread between our top selections is that the participating brands are going big with their content in multiple ways, not just paid opportunities with publishers. It’s no coincidence that the native experiences they ran with publishers were so rewarding — they were already excellent storytellers and content marketers. Their fluency in storytelling translated seamlessly to their partnerships with publishers and may ultimately help elevate the rest of the field.

As more publishers explore native partnerships to grow revenue, it’s also worth noting two publishers that were particularly busy in 2014: Forbes, with their BrandVoice experts, and Studio@Gawker co-produced a high volume of experiences with the likes of Gap, Delta, Bose, Home Depot and many others that will only grow in scale and quality.

What did we miss? Which native ads would top your list?