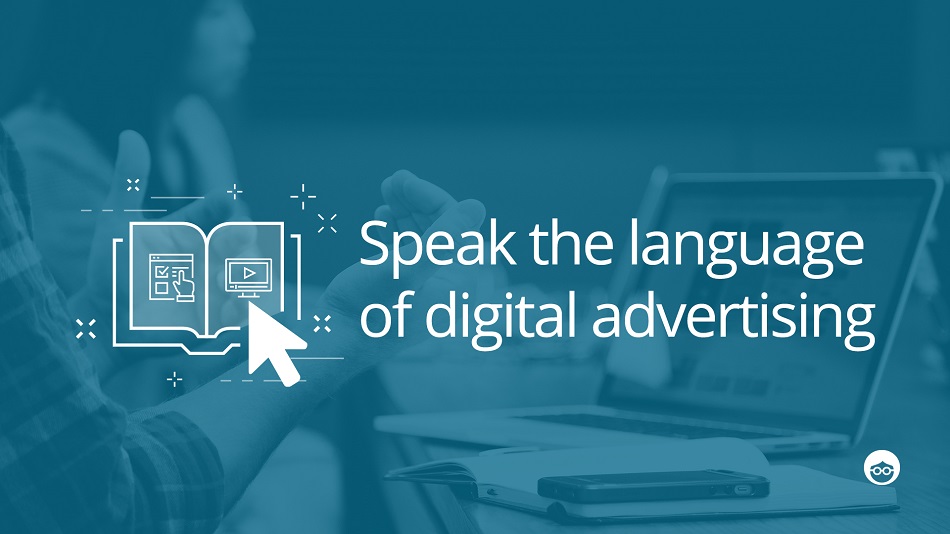 What is advertising? It might seem like the most basic of questions, but sometimes it pays to start at the very beginning. From the Latin for advertere, which means ‘turn towards’, advertising is the paid dissemination of a message for the purpose of promotion or selling of a product, service or idea. Advertising is distributed in many ways, including print (magazines, flyers, direct mail), digital (internet, mobile, email), visual (TV, billboards, catalogs) and audio (radio, robocalls). In 2017, global spending on paid advertising was forecast to reach $584 billion.

Whether you’re a newbie digital advertiser just starting out, or if you are researching digital advertising and need a little help, or perhaps you’re an experienced marketer looking to sharpen your digital skills, here’s our Digital Advertising Glossary, an A-Z Beginner’s Guide. Enjoy!

When a blogger or website owner promotes ads for an advertiser on their site, this is called affiliate advertising. The website is operating as an ‘affiliate’ of the advertiser. Affiliate advertising is based on performance – whether it be Pay Per Click, Pay Per Lead or Pay Per Sale. This means that the website owner or publisher only receives payment for ads that are clicked, or leads gathered, or when the advertised product or service is purchased. Most affiliate marketers and advertisers connect via affiliate advertising networks or affiliate programs. The choice of program or platform will depend on the type of product or service being advertised, the style of the publisher’s website, the niche target audience, payment terms, and other factors. (Read more about affiliate marketing trends)

Banner ads are a common form of online display advertising. They are delivered to web pages by an ad server or ad network, such as Google Display Network. Banner ads are hyperlinked, and are used to drive traffic to the advertiser’s website or landing page. The first banner ad appeared in 1994. Banner ads were originally shaped as a ‘banner’, a horizontal strip that usually featured at the top of the web page. As online design became more sophisticated, banner ads have adapted and now include a wide range of shapes and sizes, from small square (button) to large vertical ad (skyscraper). Today, the term ‘banner ad’ refers to online ads specifically sized 468 x 60 pixels. 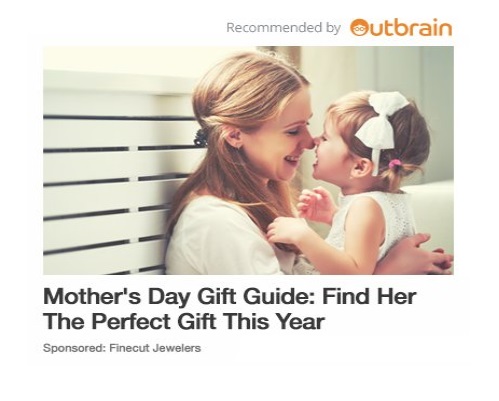 Display ads, which are also sometimes known as banner ads, are a form of paid advertising in which the advertiser pays the website publisher for every ad impression or user click of the display ad. Display ads usually feature text and/or an image, designed to compel the user to click on the ad, leading to a landing page or webpage owned by the advertiser. Display ads are served by an ad exchange – a platform that delivers online ads automatically to publisher sites based on a bidding system.

Display ad networks are platforms that provide a network of websites in which to promote paid advertisements. Examples of display ad networks include Google Display Network, Yahoo Display Ads, Facebook Ads, Linkedin Ads, ONE by AOL, native ad platforms, such as Outbrain, and many more.

Mobile advertising is paid advertising that occurs on mobile phones or devices that have a wireless internet connection. Mobile ads can be display ads published on mobile websites by mobile ad networks, or can be promoted in mobile applications as in-app ads.

Due to the smaller screen sizes of mobile devices, mobile ads are optimized for small formats, and come in a range of sizes. The most popular mobile ad size is 300 x 250, which is a medium sized rectangle, also used widely for mobile video ads. Other common mobile ads size are the mobile banner, which is 350 x 50 and appears as a horizontal strip ad, and the large rectangle, which is 336 x 280.

Native advertising is a digital ad that has the look and feel of editorial content. The ad is ‘native’ to the web page – in design and function, it seems just like the other content on the page. Native ad space is purchased by advertisers via native ad networks like Outbrain. The network uses advanced targeting tools to show the ad to the most suitable audience. Native ads are similar to content recommendations. They often appear on web pages marked by a title such as ‘Paid Content’ or ‘Suggested content’. When the user clicks on a native ad, they are redirected to a web page or landing page owned by the advertiser. Native content is not ‘hard selling’ in nature. Rather, it aims to convert readers softly by engaging them with relevant, useful or entertaining content that relates tangentially to the advertiser’s product or service. 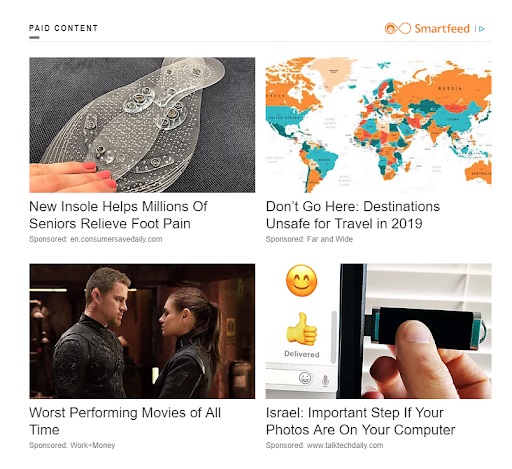 Example of Outbrain native ads as they appear on publisher sites.

Paid advertising is any type of advertising that is paid for. It stands in contrast to owned advertising (ads promoted on the advertiser’s own channels, such as its own company website, YouTube channel or social media pages), or earned advertising (writeups in magazines, blogs, websites, influencer platforms, product reviews etc, produced by a third party without being commissioned or solicited by the advertiser). Types of paid advertising include PPC (pay per click), PPI (pay per impression) and display ads, or banner ads.

PPC, which stands for Pay Per Click, is an internet advertising model used to drive traffic to a website or landing page.

There are a few types of Pay Per Click ads. Search ads, which appear in search listings or on the sidebar of results pages of search engines such as Google or Bing, social media ads, display/banner ads published on ad networks, mobile ads published on mobile apps and networks, and native ads delivered via content discovery platforms are all different types of PPC ads.

The automated sale and purchase of online ad impressions, based on software that enacts real-time bidding (RTB) on behalf of advertisers and publishers. Programmatic advertising uses data about online consumer activity to optimize ad campaigns in real time.

The DSP sends bids to the SSP on behalf of the advertiser for the purchase of online ad impressions. The SSP selects the most suitable bid, based on available inventory of ad space that is submitted by publishers. This complex transaction, which results in an ad impression, happens in a fraction of a second, based on the past online behavior of the person viewing the web page.

By 2017, programmatic advertising accounted for nearly 80% of the online advertising market.

Search advertising is the promotion of ads on search engine listings or on the sidebar of search engine results pages (also known as SERPs). Search advertising is a very popular channel, largely due to the sheer volume of traffic seen by SERPs. It was estimated that there were 1.2 trillion searches on Google in 2017. When a person uses a search engine, they are actively looking for something – whether it be a product to buy, a service, or information. Search ads are regarded as extremely effective as they reach users when they are actively engaged with a search query, which means they are more likely to click and convert. Search ads are available on all search engines, such as Google. Bing, Yahoo and others. 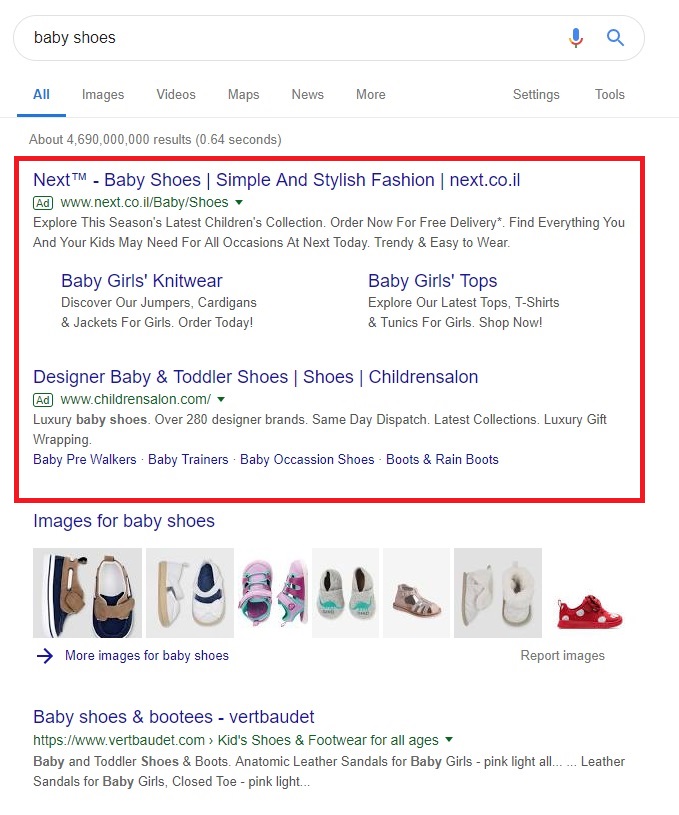 Search ads are marked in the red box.

Any type of promotion on social networks is considered social media advertising. Platforms such as Facebook, Linkedin, Google +, Twitter, Tumblr, Instagram, Pinterest, Snapchat, YouTube, and others, have become a hugely popular advertising channel. From 2014 to 2016, the global social media advertising spend doubled, reaching $31 billion. There are two ways that you can promote your brand on social media: organic reach and paid ads. Organic reach is the number of people who may have been exposed to your social media post in their news feed. Organic reach is non-paid content distribution. The number of times a post is viewed organically will depend on how many times it has been liked and shared by others. Paid ads, on the other hand, are ads that the advertiser has paid for in order that they be distributed on the ad network of the social media platform. It is very difficult to reach large numbers of viewers with organic reach alone. Paid ads are necessary in order to drive traffic to your online assets via social media.

Video advertising is the promotion of ads via video. Video ads can take many forms, whether they be short image-style videos, explainer videos or product videos. Videos may be promoted on various advertising networks, including social media and native video networks, such as Outbrain’s FOCUS, Click-to-Watch native video platform.

According to Hubspot, video is the preferred medium for web users. 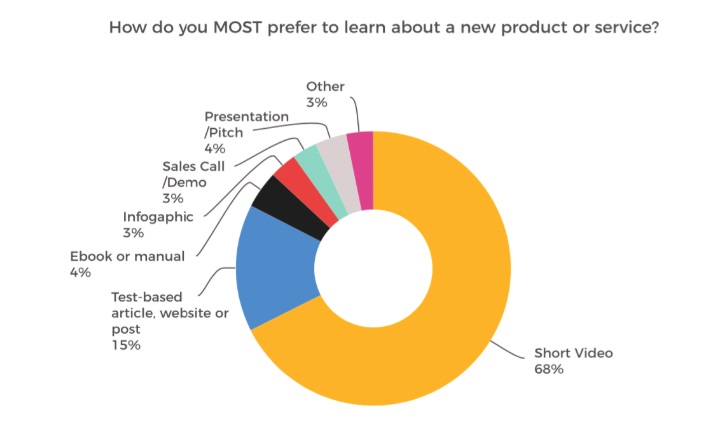 Video is predicted to make up 80% of consumer internet traffic in 2019. For these reasons, video advertising has surged in popularity in recent years, with 87% of marketers using video in their advertising and marketing activities.

So there you have it.

Digital advertising is not simple. There are dozens of different types and methods of online advertising, and there are plenty of buzzwords to go around. So we hope you’ve gotten value from our glossary, to help get you started and get you straight on your digital advertising terminology.