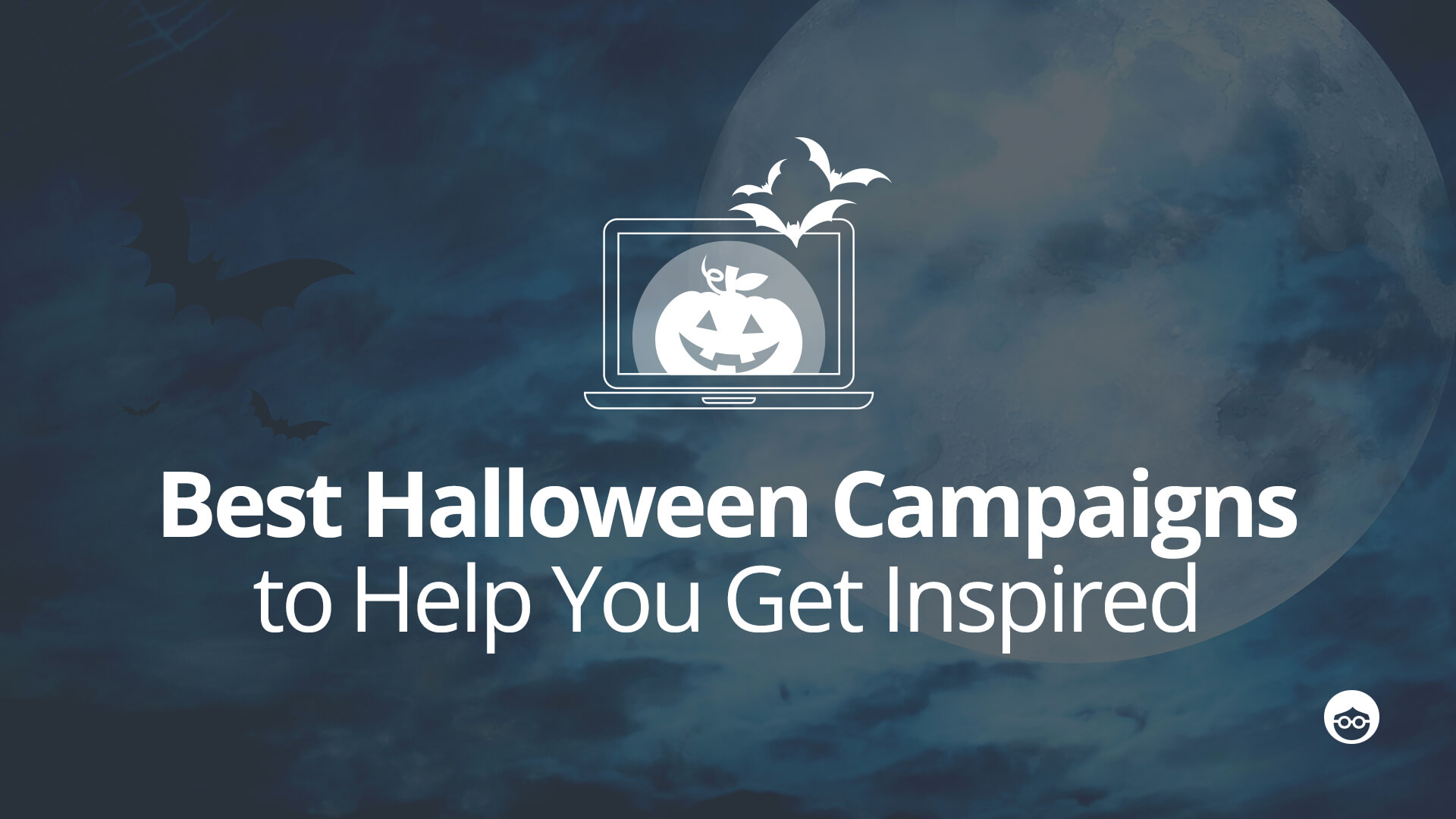 If it seems like the spooky season starts earlier with every passing year, you’re not wrong. In fact, in 2019, an astute blogger found an M&Ms Halloween product on a Target store shelf in mid-July!

Although Halloween falls on the very last day of October, the Halloween commercial season launches well before the fall leaves change color. Brands try to get in early to lengthen the Halloween shopping season, boost sales volume and put the upcoming holiday at top of mind among consumers. What’s more, brands and businesses go all out to create the most hair-raising (and fun!) Halloween campaigns to keep customers on their toes and opening their wallets.

Let’s take a look at some of the best Halloween campaigns in 2019:

Candies and chocolate are one of the biggest sellers during Halloween, after costumes and decorations. In fact, 9 out of 10 Halloween shoppers in 2018 planned to buy candy.

In 2019, the Mars company did a 180-degree-turn away from delicious fruity candy, with its release of Zombie Skittles. The product comes with 5 tasty Halloween themed flavors, such as Boogeyman Blackberry and Mummified Melon. However, it also includes a ‘rotten’ Zombie flavor, and the consumer will only know they are eating it once they experience the terrifyingly awful taste.

The beauty of this kind of marketing tactic is its potential to go viral with the help of influencer marketing. Playing on the psychology of the dare and the human fascination with anything weird, the Zombie Skittles concept drew loads of attention online. There were numerous video reviews, video challenges and taste tests by bloggers and foodies to show viewers just how horrible (and irresistible!) the rotten candies really are. As the Skittles press release stated, “It’s an utterly disgusting taste experience that will elicit strong reactions from anyone and everyone daring enough to try it.” The key to any great content marketing campaign? Emotion, of which Zombie Skittles have plenty! 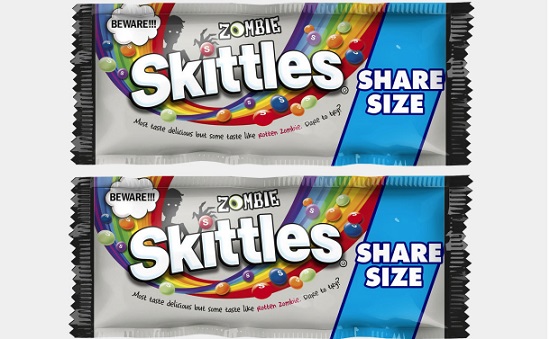 Universal Studios promoted its annual Halloween Horror Nights event with a TV spot that turns the innocent “watch party” concept into a terrifying prospect. The Halloween Horror Nights event, held at Universal Studios locations in Florida, California, Japan and Singapore, is a popular Halloween tradition, combining mazes, attraction, parties and more, all with a horror theme. This year, the focus was on the 80s, and the promo campaign centered around a group of friends getting together at home for a relaxing watch party. But the night turns terrible as the group is preyed on by their deepest fears. It’s a fun, nail-biting short video that definitely gets you in the mood for a horror night. Plus it’s a good example of the power of video advertising to communicate a message and a mood to your target audience. 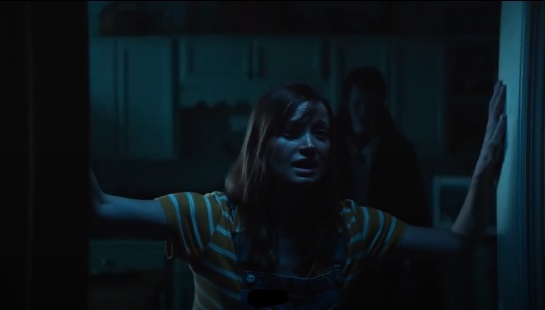 Another emotion that works well in marketing is nostalgia. Think of recent Disney movie remakes, like Aladdin and The Lion King. The grownups who watched the original films in the 90s enjoy a nostalgic trip back to their childhood, while the next generation (their kids) fall in love with the new version at the same time. UNICEF Canada is banking on nostalgia with a reboot of its traditional Halloween Heroes campaign, where kids would go trick or treating with orange UNICEF money boxes, collecting donations house to house while they collect candy.

This year, UNICEF has launched its Halloween Heroes campaign in a fully digital online format, based on four “hero” characters representing kids’ right to childhood in areas like water, food, education and security. It just goes to show that in content marketing, you don’t always have to be new and original – sometimes, you can rejuvenate an old theme and make it powerful for a new generation.

Here’s an example of another nostalgia-driven campaign that’s playing on a theme – and using a drip approach on social media to tease customers with a slow buildup. Famous makeup artist, YouTuber and beauty blogger Manny MUA launched a special Halloween cosmetic collection under his brand Lunar Beauty. The Moon Spell Collection is based on pop cultures’ favorite witches from the 90s, drawing particular inspiration from the cult classic series Charmed.

The campaign created suspense over a few days before the launch of the spooky collection on October 4, with the release of a long-form half-hour YouTube video, and Instagram posts and teasers to get customers in the Halloween mood. The popular campaign combined good old nostalgia, a clear and catchy theme, and a slow drip approach to build momentum. As can be seen in some of the Instagram comments before the products were available for sale: “Can you drop the collection already so i can buy it!” When customers are begging you to release your products, you know your Halloween marketing campaign is a success.

Did you know Halloween is a huge boon for business, and not just in the US?

In 2017, Halloween spending in the US was projected at just over $9 billion. In the UK, that number was expected to reach £270 million.

While there’s a strong focus on candy, costumes, and decorations, Halloween is a huge retail event reaching even more categories, like cars, video games, and even makeup.

Check out these fantastic and frightening Halloween content marketing campaigns in 2018 that kept audiences worldwide in delicious suspense:

What better way to kick off our top Halloween content marketing campaigns than with Burger King’s ingenious idea. It combined customer interaction with the clever trolling of rival McDonald’s and its famous clown mascot.

Burger King offered a free Whopper burger to the first 500 people to visit select Burger King stores dressed as a clown. The campaign was promoted via a creepy clown-filled YouTube video with the hashtag #ScaryClownNight.

A campaign that combines clowns and trolls? We want our Whopper!

In a Halloween campaign titled “Bite Size Horror,” confectionary giant Mars screened a series of four commercials for Skittles, Sunburst, Snickers, and M&Ms, each featuring a mini horror movie. Rather than directly promoting the products, the videos engaged the viewer with the brand by creating unforgettably scary stories, ending with a screenshot wishing “Happy Halloween.”

The long-form videos ran for two minutes, providing the necessary time to develop the plot, characters, and suspense for an engaging video story. This follows a clear trend as part of the recent rise in long-form video, which has been known to achieve even higher completion rates than shorter video ads.

Check out the Skittles “Bite Size Horror” commercial, which freaked out spectators when it was screened at a Yankees vs Indians baseball game:

If you thought Halloween was all about kids in costumes collecting candy, then you are missing out on the beautiful, dark side of Halloween. Even Dior got into the spooky vibe with an influencer campaign featuring Bella Hadid, where the supermodel demonstrated how to create fabulous makeup looks just for Halloween.

The “how to” makeup videos were promoted on social media under the #DiorMakeupHalloween hashtag, targeting an entirely new Halloween audience with content that speaks their language. 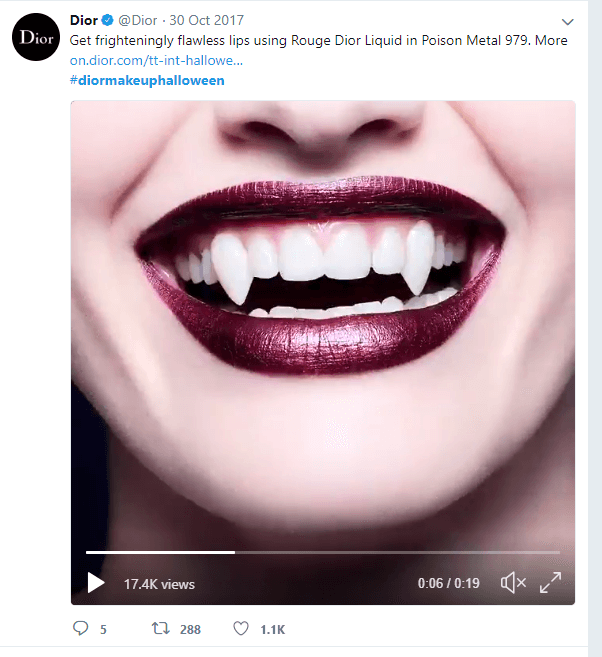 Candy, costumes, and of course, the obligatory pumpkin carving – Halloween is, and has always been, a special day for children.

It’s a great example of content designed to appeal to different target audiences.

Last year, M&Ms ran an interactive social media campaign in the month leading up to Halloween. The campaign featured a weekly installment of an ongoing ghost story, promoted on Facebook, Instagram, and Twitter.

Every installment led up to two alternative endings, and viewers were asked to vote on their preferred finale. The following week, the story continued, based on the previous week’s winning ending.

The campaign combined some of the best practices of content marketing: a dynamic story, compelling video, and a layer of interactivity to get audiences engaged and personally involved. 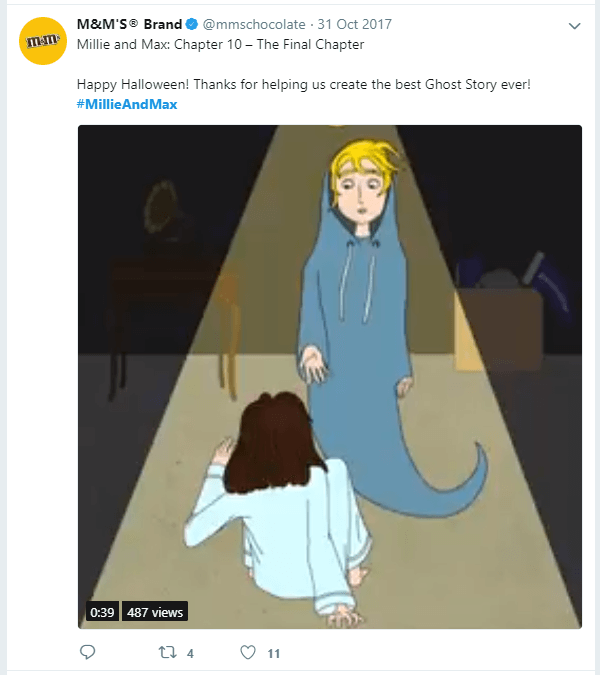 Fanta is repeating its popular campaign featuring seasonal graphics on its packaging along with experiential Halloween kits available at every point of sale (POS). This year, the graphics can be scanned to Snapchat, where they unlock Halloween-themed filters.

The soft drink giant’s Halloween campaign combines physical and digital elements, building on its past success. Last year, Fanta sales grew by 23% at convenience stores during the Halloween period.

It just goes to show how powerful content can be when made interactive, and when it includes more traditional marketing activities.

12. Fortnite Does the Ultimate in Suspense – and the Results Show

We’ve discussed before how Fortnite, the world’s leading interactive computer game, pwns when it comes to content marketing. For a game that was released only a year ago, every whiff of marketing generates an incredible amount of interest, and Halloween is no different.

Last year, Fortnite released the Skull Trooper “skin” for Halloween, before the game reached the phenomenal levels of popularity it enjoys today. Now, the marketers behind Fortnite are using an incredible amount of hype to further ignite interest during Halloween 2018.

The question on everyone’s minds: Will Fortnite reinstate the Skull Trooper skin for Halloween this year? It’s this kind of suspense and build up that is the foundation of fantastic marketing. 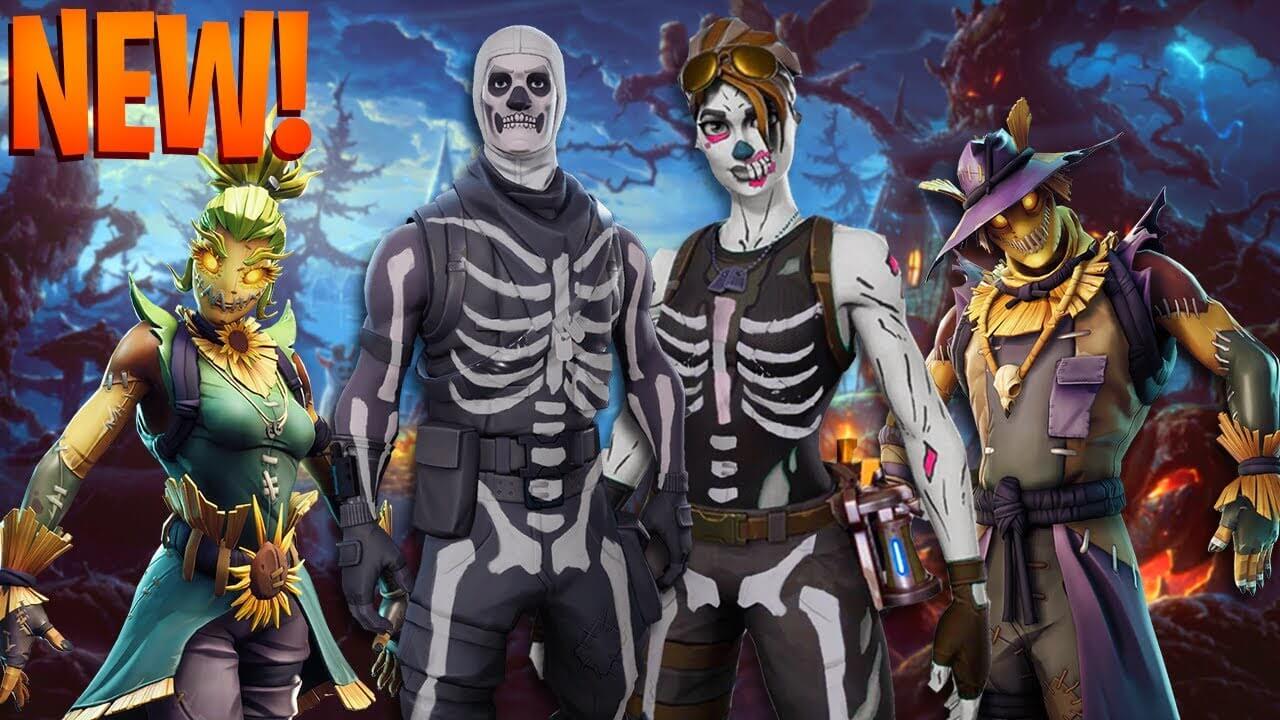 Just check out the impact of the suspense-laden campaign on Google Trends — interest in the search term “Fortnite Halloween skins” just keeps going up and up:

Halloween is not for the faint of heart, and that’s true even within content marketing.

Spice up your Halloween content campaigns with creative inspiration from these seven spooky examples, and you’ll be celebrating with scary-good results!

Also, be sure to download our holiday marketing guide for more tips about gaining and retaining your holiday customers.