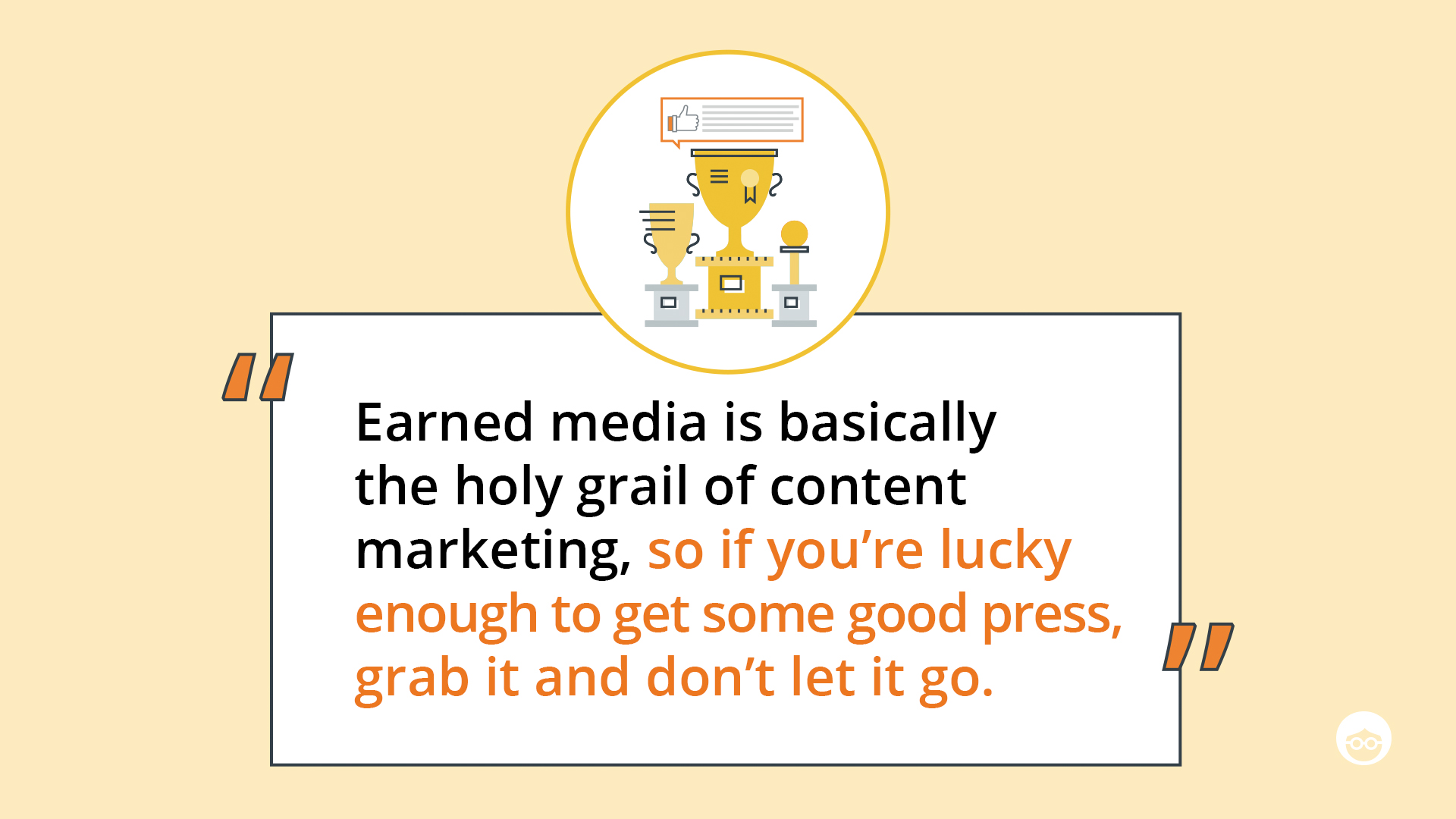 Oh happy day, it finally happened —  your brand landed some very exciting earned media. Whether it’s a good review, a news piece, a press release pickup, or organic brand interaction gone viral, you knew about it the moment it happened because you’re tracking your brand on google news. After you’re done high-fiving and back patting, what happens next? You promote it, of course!

Earned media can have as long of a lifecycle as you’re willing to work to give it. Treat it like you would a piece of content you created: tweet about it, post it on Facebook, send it to your lists, email bloggers, journalists, and influencers about it. If it’s something you can interact with, then interact with it. If it’s a news piece, consider making a page on your site that recreates, quotes, or aggregates the mention, so that you’ll always have a clean link to use for promoting it in the future.

Sometimes, though, you’ll want to give something a little more reach than your organic networks can provide. Maybe the earned media is so fantastic you want it in front of more eyeballs. Maybe you want to extend the life of the mention through another few news cycles. Most news outlets have a “most read” sidebar — generating more pageviews will help push your story up that list, thereby giving you even more exposure. This is when it’s worth using paid promotion to give your earned media even more lift. Here are some options:

Paid social is the blunt force instrument of paid promotion. It’s clearly an ad, but it gets your piece of earned media in front of the right eyeballs. Ideally, paid social creates a kind of virtuous cycle, where your earned media is re-promoted organically by people after seeing an ad for it on their social media feed.

Whether it’s a promoted tweet, Facebook ad, or maybe even Instagram ad, paid social can help create the impression that your brand is “everywhere all of a sudden.” Having your earned media go viral will create a whole new crop of earned media talking about people talking about you: thinkpieces, observations, hashtags, and more. The content marketing dream, right?

A more subtle version of paid social is the paid influencer. This can take many forms, from paying an influential blogger or youtube star to do a sponsored post to getting someone with a massive following to tweet about your mention. Sponsored content can be a bit slippery — it’s not always clear when something is a paid mention, and it’s not always clear what influencers are open to sponcon. Katie Notopoulos of Buzzfeed has a hilarious column about this very issue.

So while some influencers might be open to promoting your content, you’ll probably have the most success reaching out to people you already have a relationship with. These are great relationships to cultivate in any case. Buzzstream looks like an interesting tool for creating and tracking those links.

Outbrain Amplify is great for this kind of promotion. While content marketing professionals might think of Amplify as primarily a way to distribute their owned media, it’s a great way to share earned media too. In fact, it may be the easiest way to get earned media mentions in front of millions of eyeballs across tons of premium sites. Overall,Amplify’s optimization tools make sure your money is spent the right way.

Promoted posts are a close relative of paid social, but instead of pointing readers to a link, you’re creating a piece of meta-content that promotes your earned media. For example, Reddit allows paid posts that mimic the style of their organic posts. Medium’s promoted stories look and feel like regular Medium posts but get a boost. LinkedIn ads are similar, allowing users to create posts that are promoted to a targeted audience. For high rollers, Buzzfeed helps paid partners create and run viral content.

With this kind of promotion, the strategy is to create a post that builds awareness of or interacts with your earned media, perhaps teasing it blogger-style to encourage click-throughs.

The most successful paid promotion for earned media will depend entirely on what kind of mention you have and what your budget is. The most important thing, as always, is to think about what has worked for your brand in the past, and what will grab the interest of the people you’re trying to reach. Earned media is basically the holy grail of content marketing, so if you’re lucky enough to get some good press, grab it and don’t let it go. Remember: you can and should promote your earned media at least as hard as you promote the content you create.

Audrey Ference works with Outbrain's headline writing team. Her work has also appeared in Slate, Salon, the Hairpin, the Billfold, the Toast, Teen Vogue, and others.