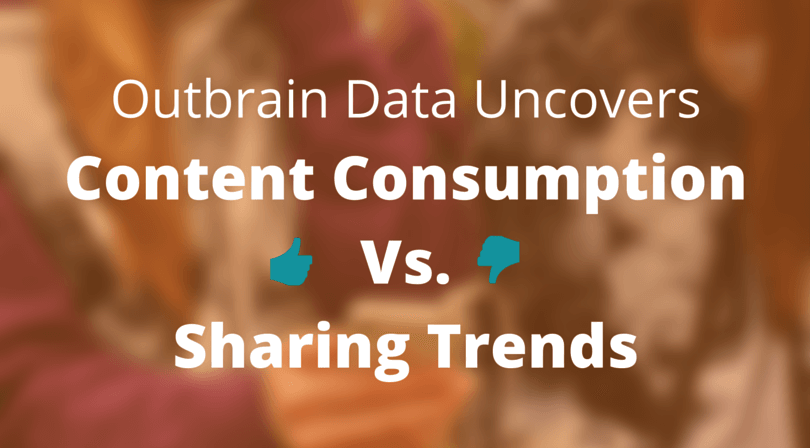 This article, originally published here, is based on the academic paper, “For Your Eyes Only: Consuming vs. Sharing Content”, authored by Outbrain’s Chief Data Scientist and Organic Recommendations Team Lead. It was accepted to the Third Workshop on Social News on the Web at the 25th International WWW Conference, happening on April 12th 2016, and will be published in the Association for Computing Machinery (ACM) Digital Library.

Assuming that the answer is “no,” how do you determine what to share?

The answer to this question is meaningful for publishers, content marketers and researchers alike.

Many of them try to infer user engagement from the sharing activity of users, among other signals. The underlying assumption is that highly shared articles are highly interesting/engaging for the users.

Based on more than a billion data points from hundreds of publishers which use Outbrain’s Engage platform worldwide, we show that the above assumption is not necessarily true.

Content categories such as Sex, Crime and Celebrities are characterized by a high positive dissonance. Articles under these categories tend to be visited relatively more than being shared.

On the other hand, content categories such as Books, Wine and Careers are characterized by a negative dissonance. Articles under these categories tend to be shared relatively more than their popularity.

The figure above shows content categories, sorted in a descending order by their private-social dissonance.

To the human eye, inspecting the categories from top-left to bottom-right the picture is clear:

Users tend to read without sharing articles from categories that could harm (or not increase) their social appeal. On the other hand, users tend to share categories that are not relatively popular, yet they reflect a positive and socially desirable identity of the sharing user.

Our results are time consistent and did not vary substantially during a period of one year.

To further test the value of social signals in terms of engagement, a model which utilizes different signals and produces click-prediction was trained and deployed on a live recommendation system. The resulting weights ranked the social signal lower than other signals, such as click-through rate.

It would be interesting to investigate the relation between private-engagement and Facebook’s recently announced Reaction buttons.

Will some of the new buttons have a close-to-zero dissonance, and thus can be used as an accurate metric for engagement?

Another direction is to use refined private-engagement signals instead of CTR, such as time-on-page or scrolling behavior. An interesting question can be – ‘do users actually read what they share?’.

In conclusion, publishers, marketers, architects of recommendation-systems and anyone who uses social signals as an engagement metric should be aware of the private-social dissonance.

Roy Sasson is Outbrain’s Chief Data Scientist. His team applies predictive modeling and machine learning research that optimize Outbrain's recommendation system, in strategic areas such as CTR prediction, user classification and mechanism design. Roy has a PhD in Applied Econometrics from Tel-Aviv University, where he has been teaching Econometrics since 2008.

Ram leads the Organic recommendations team. He is responsible for serving recommendations that are engaging for the user but also helping the publishers to meet their goals. He holds M.Sc. and Ph.D. degrees in computer science and 8 years of experience in the art and science of industry-level recommender systems.