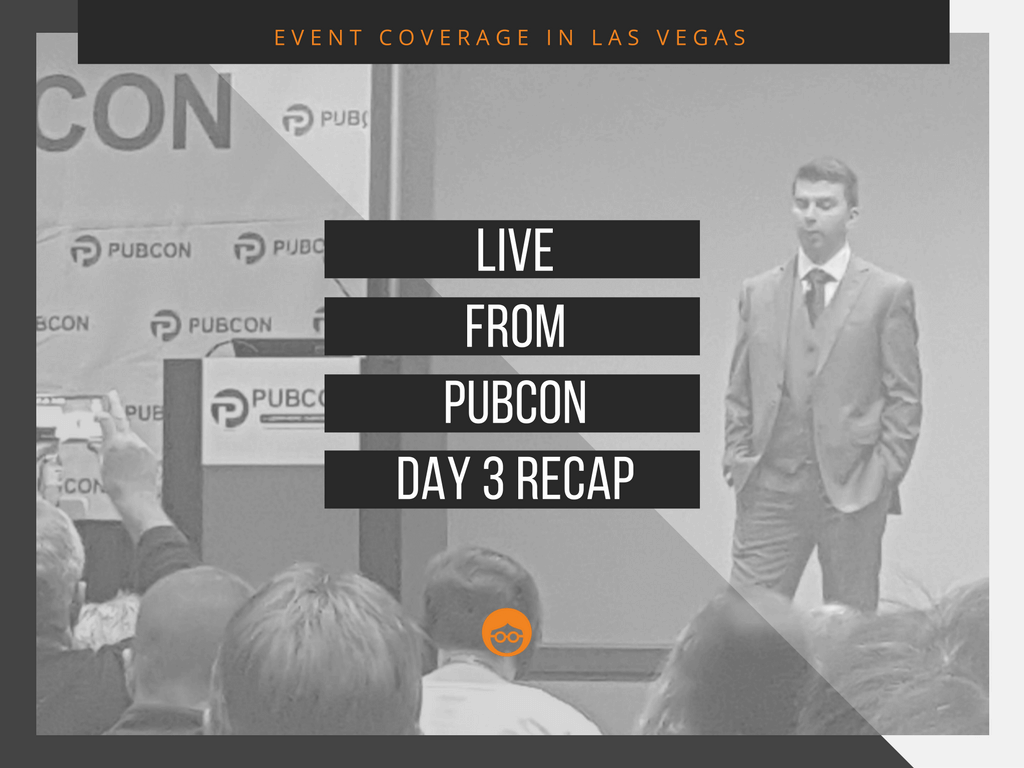 Good morning. Day three of Pubcon started off with another session with Gary Illyes of Google. He talked about search infrastructure, features, and ranking in his morning keynote.

First up, here’s what he had to say on search infrastructure:

Gary suggested that everyone switch to https at some point. He explained that it makes sense for UX and it protects users from annoying scenarios. Google tested it with some publishers. While some were initially affected negatively by the change, they fixed those problems and it works properly now. Gary told publishers thinking about making the move to catch him on Twitter.

Google decided to drop the mobile-friendly label from search results, and won’t show pages that don’t work on a mobile phone. On January 10th 2017, Google will also change their mobile algorithm to demote sites which are not mobile friendly.

AMP
AMP should fix a lot of issues for mobile. If your client does not have a mobile site, AMP can be an easy way to create a mobile friendly site that’s super fast. So, depending what site you have, you can use AMP to improve your mobile page speed.

Mobile First Indexing
Our systems weren’t designed to get two versions of the same content, so Google determines your ranking by the Desktop version only. Google is now switching to a mobile version first index. Gary explained that there are still a lot of issues with this change as they are losing a lot of signals (good ones) from desktop pages that are don’t exist on mobile. Google created a separate mobile index, which will be its primary index. Desktop will be a secondary index that is less up to date. (Read about it here). If you care about recipes, don’t forget to upgrade your structured data to mobile as well.

Gary moved on to the topic of ranking and spam. Here’s what he had to say on each of the following topics.

Rater Guidelines
Google, he explained, is using human evaluators to better understand if its modified search result is better. It doesn’t have a final version and it is always evolving. Read and go back to our rater guidelines, follow it and see what has changed. It’s 160 pages long so scan it for top issues that you find interesting.

RankBrain and machine learning in rankings
When it launched, no one really talked about Rankbrain because Rankbrain doesn’t really change anything. It works well with long tails and negative queries. It is multi-layer and very complicated. Google wants their search to learn and evolve from failures in rankings.

Panda
Gary explains that for months he bugged ranking leads to open up the Panda algorithm and he still thinks they need to release more info about it. (Additionally, if you are interested in more questions about Panda, Outbrain answered a lot of questions in this article.)

Penguin
Penguin will not push sites down in search results. It will discount bad links and incoming spam and ignore them. If Penguin sees bad links, it can demote an entire site. It works in real time. Not all directories are bad, but if the purpose of the directory is to place links, that’s a bad directory.

And finally, on the year ahead…

Assistant Progressive Web Apps
Google plans to release “Google O” for voice search. This can help everyone with their day to day lives. Gary couldn’t talk about the coming interesting things they are about to do with it, but in a couple of months, they will be announcing it. Google is trying not to rush and it will ultimately change a lot. As a close, Gary said to keep an eye out for it, especially when creating a native app, as PWA can send push notifications to users.

Key takeaways from the first part of this session with Bill Hunt, President at Back Azimuth Consulting:

Wise words for all SEO specialists to live by from Carrie’s session: “Semantic markup is not a Band-Aid for bad SEO. If you do it wrong, you will get pushed down.” Other highlights from Carrie’s talk include the following tidbits:

There are so many cool things that Carrie showed us you can do in email markup!

Michelle gave a great breakdown of which type of influencers to reach out to per business. 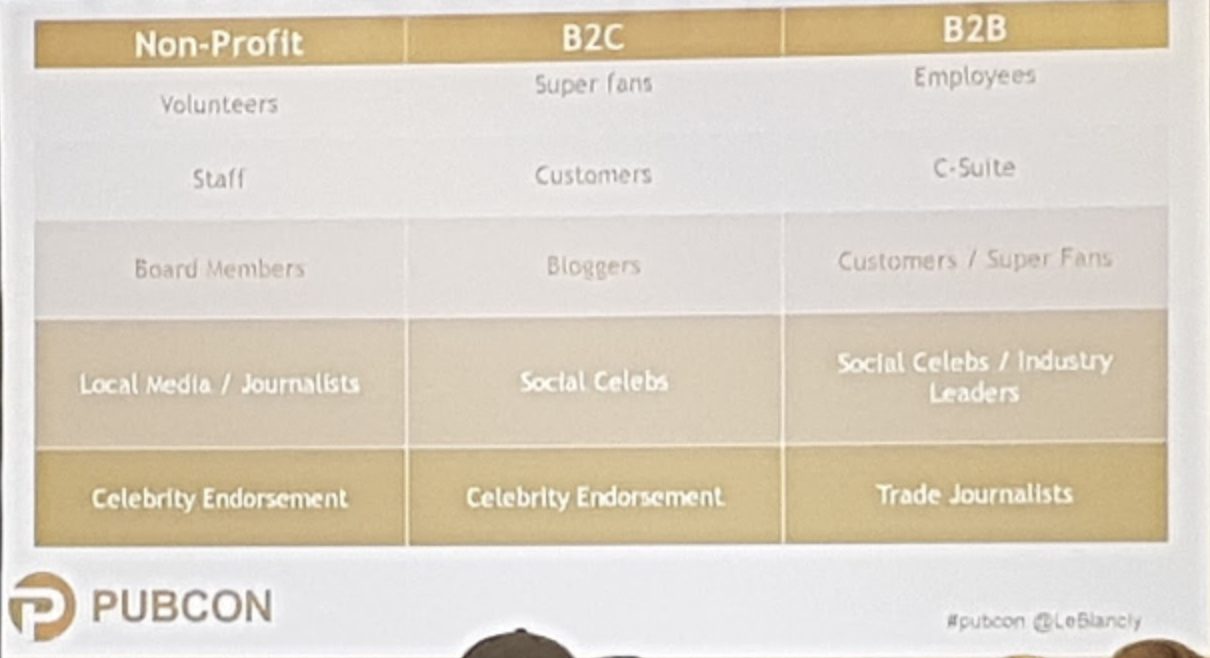 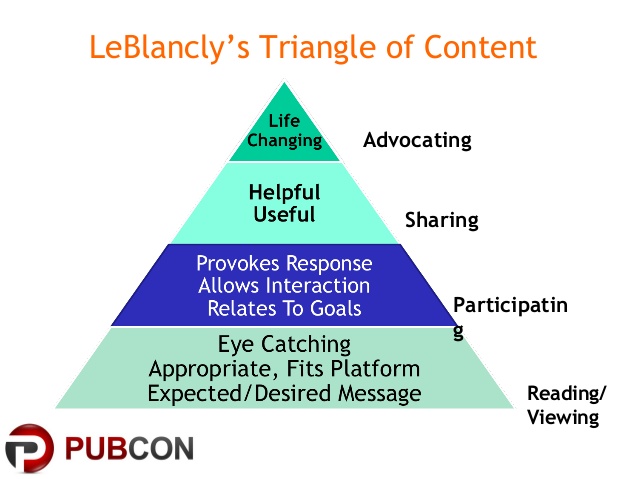 She also delved into each of the following:

Final Session: SEO in 2016, by Duane Forrester and Eric Enge

In this session, Duane and Eric explained that they are currently seeing a lot of major brands invest in speed: Apple news, Facebook instant articles, and AMP by Google. The two did an a/b testing  before  launching the AMP version and this is what they got: 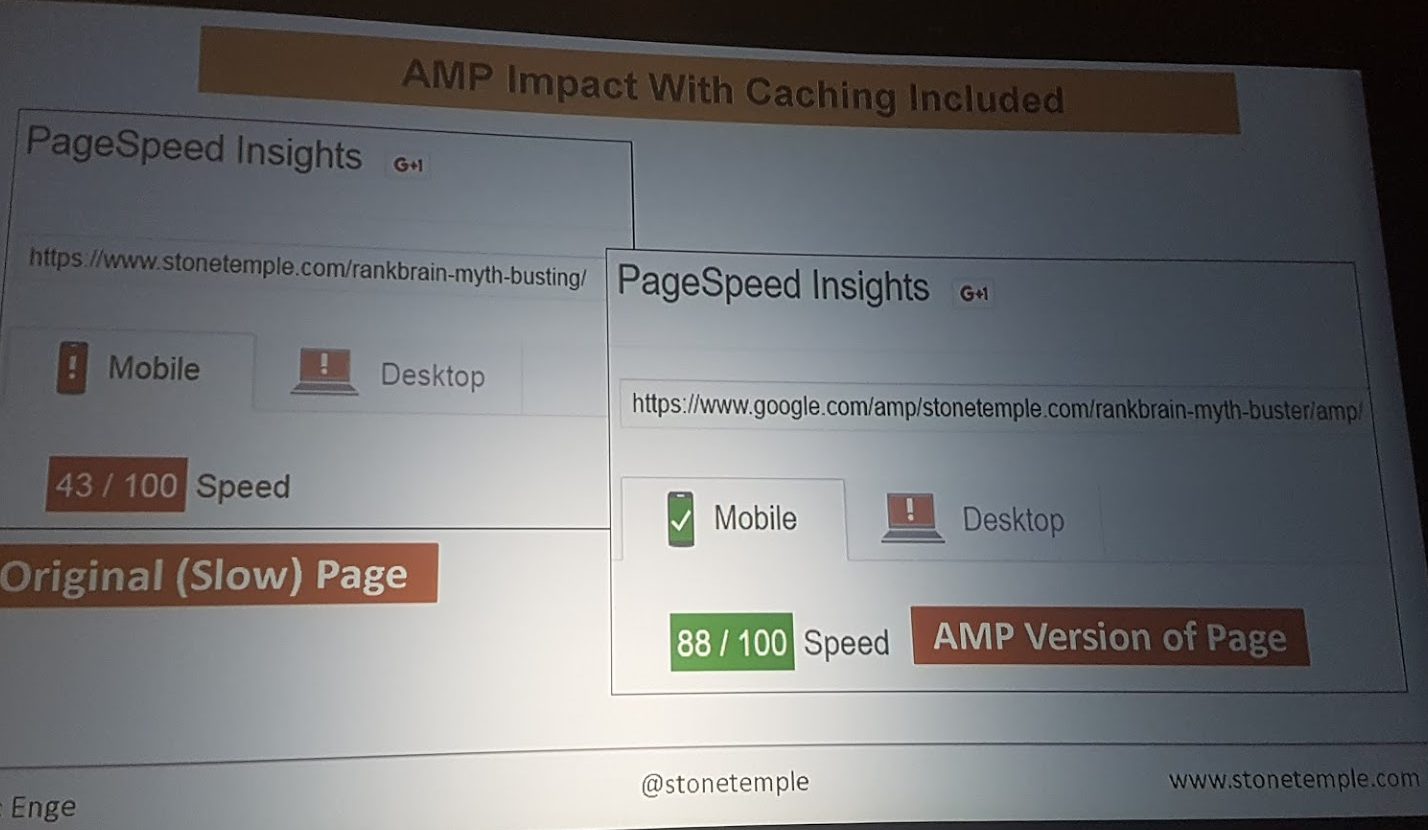 Rankbrain
Rankbrain basically makes things much easier as it has a better understanding of language. For example, there’s a difference between a search for “the office” (the TV Show) and just a plain “office.” It is the same for negative keywords as well. Google used to demote “without” and it now doesn’t: 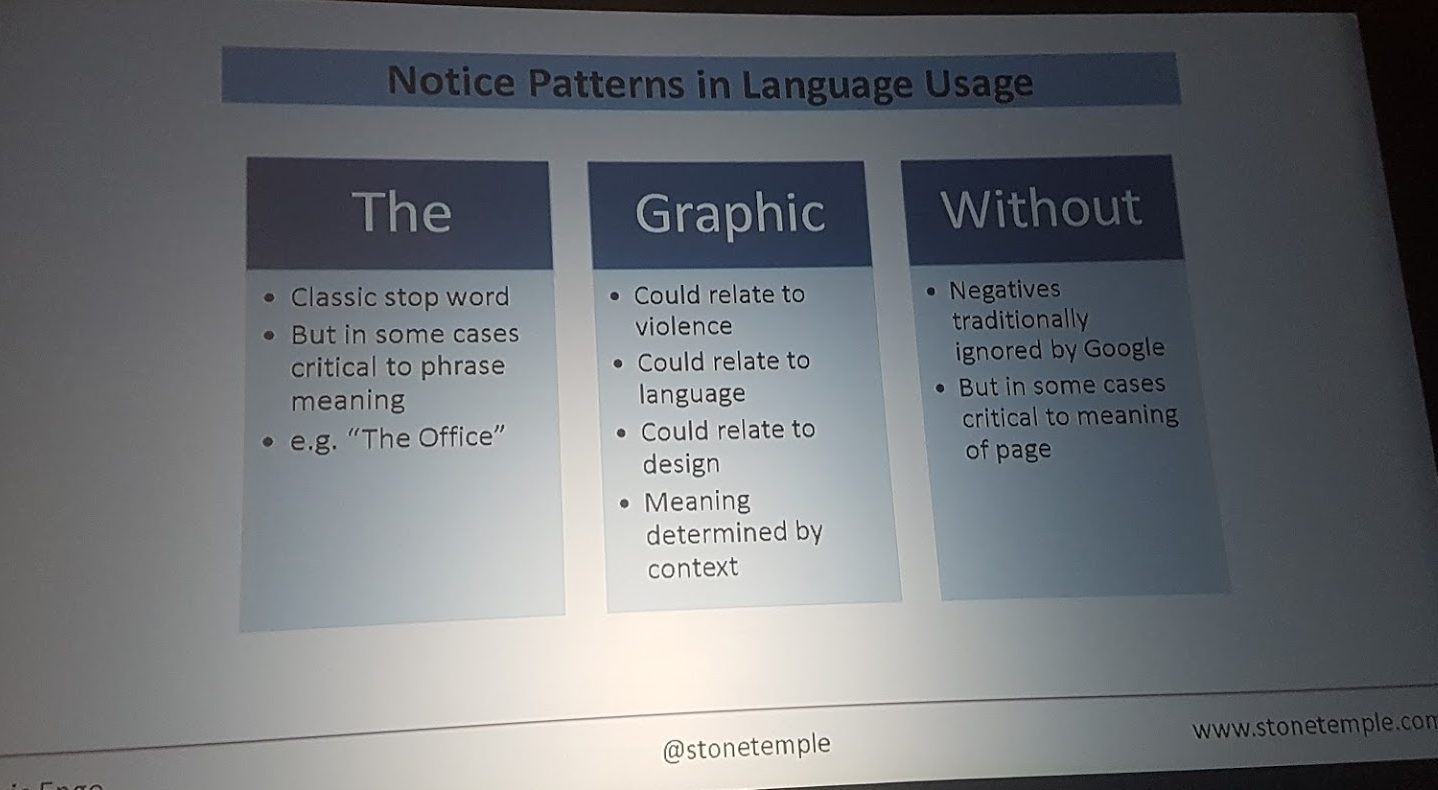 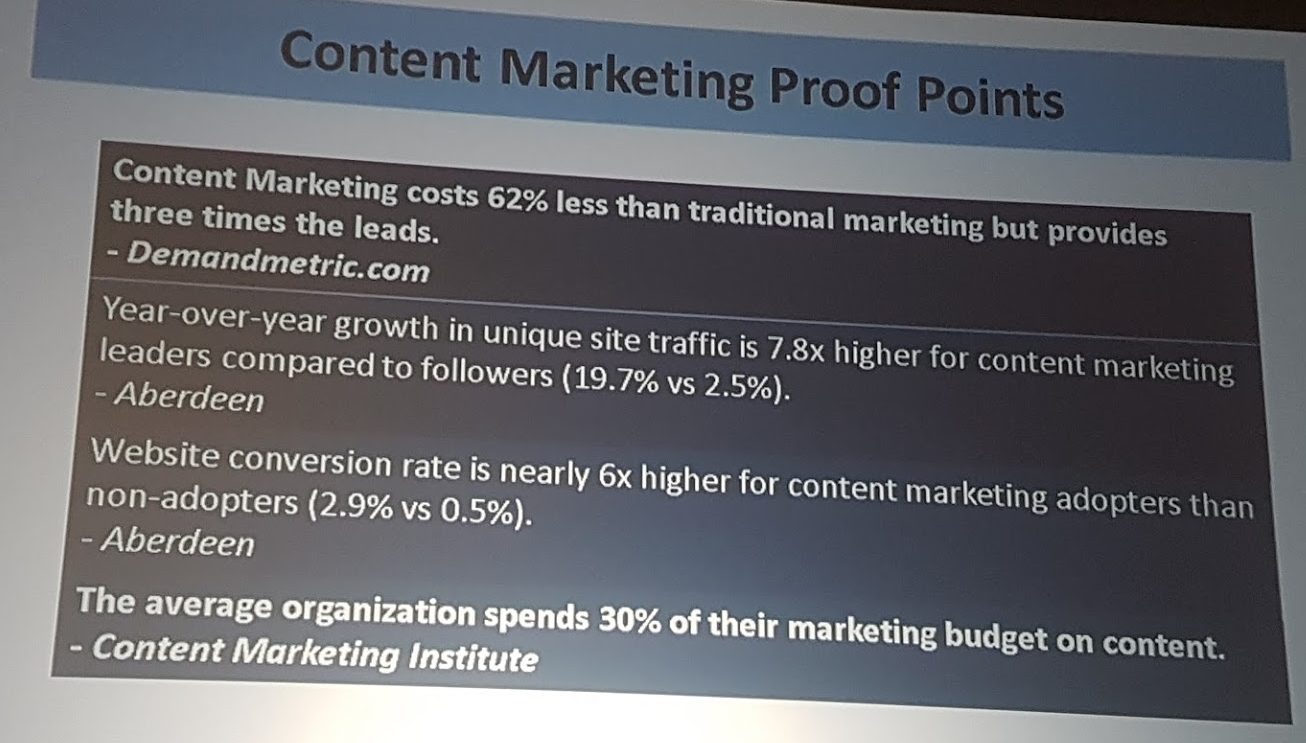 With content marketing, you can create killer content that draws a lot of attention. The effect of rankings takes time. But once you get there, your content takes off. 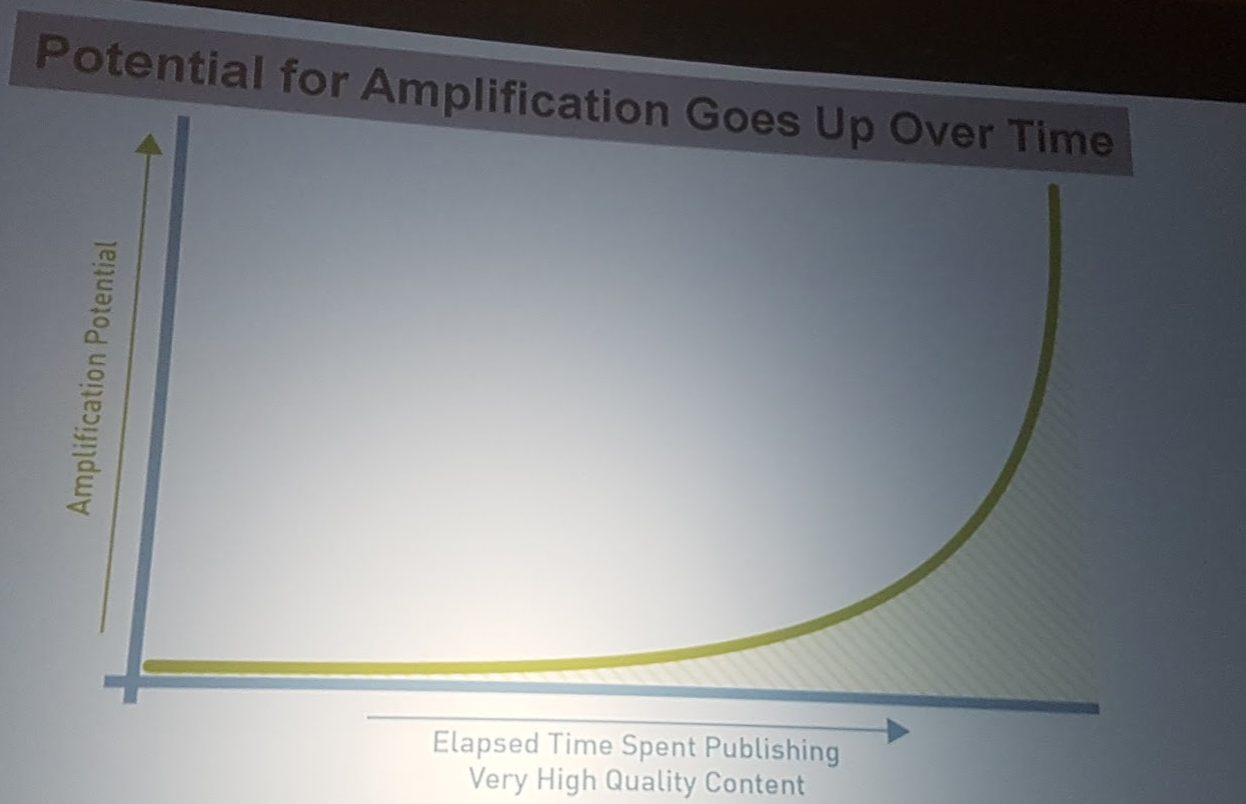 You’d better be good with technical SEO. The future holds data. There are no shortcuts today that works. @DuaneForrester #pubcon

Liraz is an international SEO and content expert, helping brands and publishers grow through search engines. She is Outbrain's former SEO and Content Director and previously worked in the gaming, B2C and B2B industries for more than a decade.