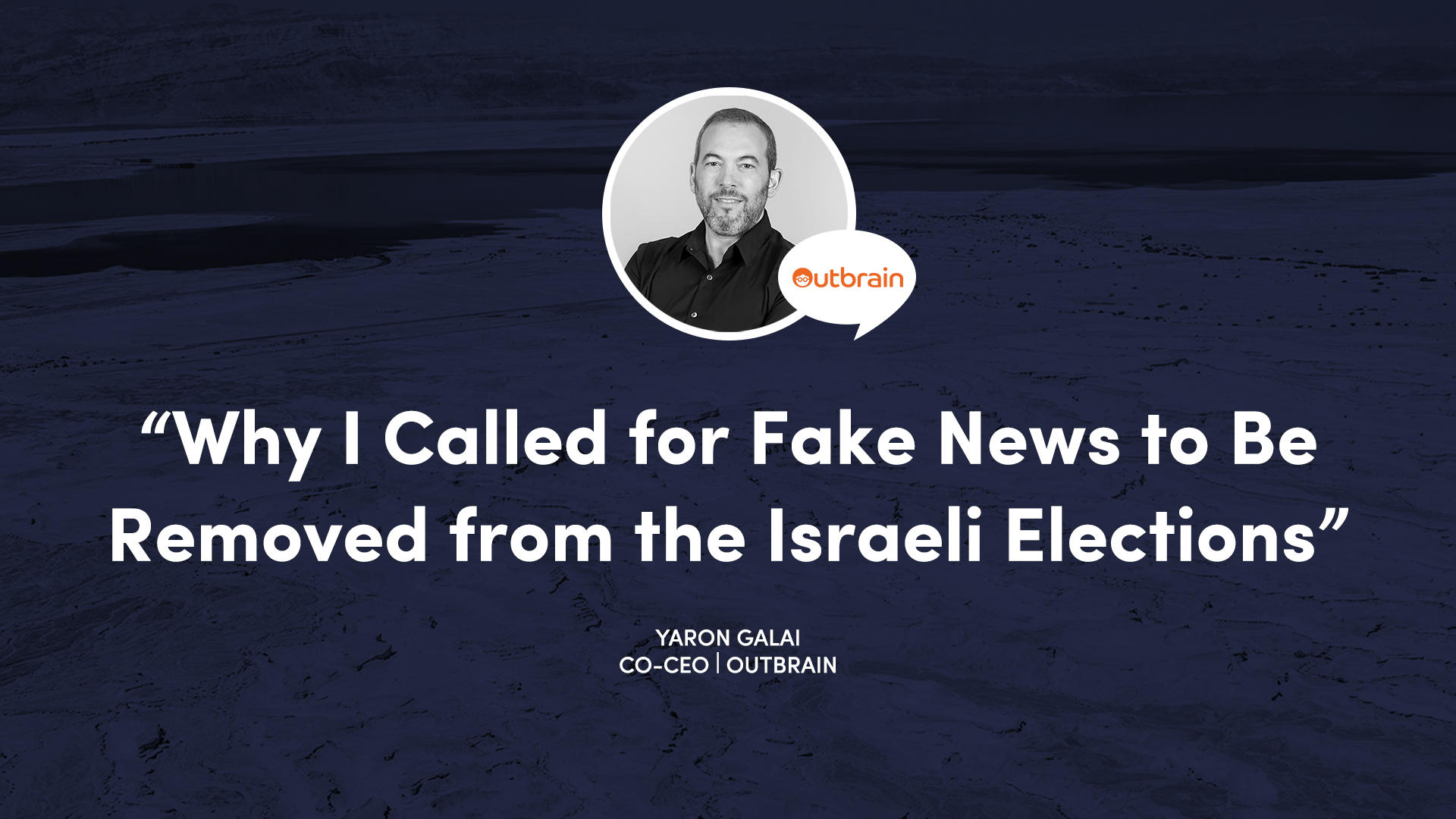 At Outbrain, we hold ourselves to a few core values. Two of them include:

These values are even more important at times of democratic elections. We’ve now seen too many countries in which the integrity of elections or referendums come into question due to the distribution of misinformation and fake news in online media and social networks. Distrust in media is now a clear risk to democracy itself.

Taking it a step further, we’re seeing a global surge in the use of online media for incitement against minorities, and in creating an environment of divisiveness and hate towards the ‘others,’ whoever those might be.

Recently, Israel held its general elections, once again, for Parliament, aka – The Knesset, and ultimately prime minister. For all you not familiar with Israeli politics, the country holds elections every four months.

Ahead of the elections, it was revealed that one of the leading parties in Israel has been heavily promoting content on Facebook inciting hate against one of the minorities of Israeli citizens, and fake news about attempts to ‘steal the elections.’ Facebook, needless to say, ran all of this content until they were shamed into blocking and removing it (and even then – they committed to a 24-hour pause until they could decide if it should be blocked or not).

As the political campaigns started a few months ago, we at Outbrain have updated and tightened our content guidelines as they relate specifically to politically motivated content. Since doing so, we have rejected nearly all politically related campaigns that were submitted in Israel, including many that were currently running on competing platforms.

In short, we only run positive stories about political candidates, where there’s full transparency about who’s creating and/or promoting the content, or ensuring the content is a truthful, editorial story.

Last month, I sent a public letter to the Chairman of the Central Election Committee in Israel. In the letter, I outlined the key guidelines we have implemented at Outbrain to avoid fake news, hateful/inciting content, and various other harmful material from appearing in our network. On the same note, I called upon the Central Election Committee to extend such guidelines to Facebook, Google, and other big tech platforms.

The letter was met by positive views in Israel. In fact, it was covered by Israeli publications Calcalist: Outbrain Asks Israeli Elections Committee to Keep an Eye on Facebook and Google and Jerusalem Post: Outbrain CEO: Facebook, Google Should monitor online election discourse. Sometimes, all it takes is one person to start a change. One push to get to where we want to be.

Our values at Outbrain are global and timeless, and I’m looking forward to implementing similar guidelines and processes in *every* country in the period leading into local elections. Together, we can ensure elections are clean of tech involvement by being enforcers of change.

Yaron is Co-Founder and Co Chief Executive Officer at Outbrain. Prior to founding Outbrain, Yaron was Co-Founder, SVP of Quigo, Inc., a provider of performance-based marketing solutions for advertisers and premium publishers. He previously served as the CEO of the company for three years. Quigo was acquired by AOL in December 2007. Previously, Mr. Galai was Co-Founder & VP Business Development at Ad4ever, a developer of rich-media advertising technologies for the web which was later acquired by Atlas (a division of aQuantive). Earlier, he was the Founder of NetWorks Web Design - an SEO and web design firm. At NetWorks he oversaw the production and search engine optimization of over 30 websites. Mr. Galai studied industrial design at the Holon Technological Institute, and is a Major (reserve) officer in the Israel Navy.