While Candidates Fight for Votes, 5 Politically Savvy Brands Vie for Our Dollars 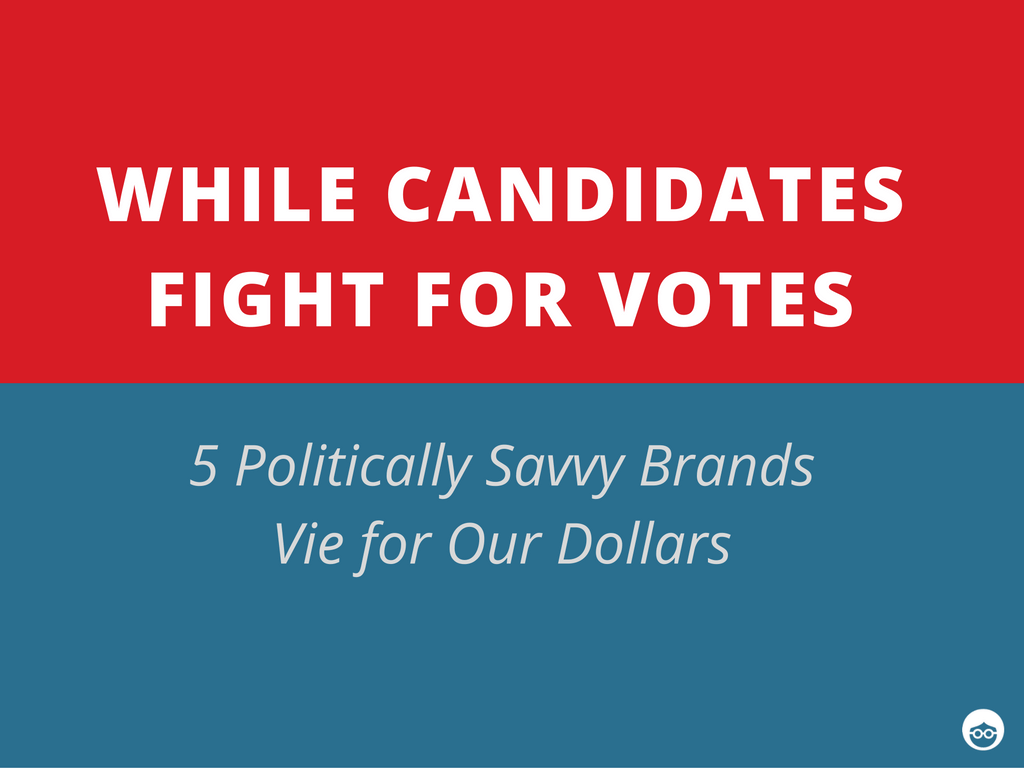 Do people and brands that enjoy the national spotlight have a responsibility to lend their voice to important issues? These five brands sure think so. In 2016, with the country seemingly more divided than ever, every vote counts.

But every dollar counts, too, and that’s why politically savvy brands are hoping to turn the pivotal 2016 election to their advantage. Below are five sterling examples of election-themed campaigns done right, offering a lot of inspiration for even the most seasoned marketer.

Without quite taking sides in this historic election, Doritos is nonetheless leveraging its visibility to encourage young folks to get out and vote. Fans of these zesty snacks might find themselves targeted with a “No Choice” bag of chips (“No Taste, No Crunch, No Choice”) as a reminder to register before the deadline.

America is no stranger to “rock the vote”-type campaigns, but Doritos’ efforts feel particularly on-trend this year. Some of the best marketing endeavors masterfully leverage human emotions, such as the fear of missing out (FOMO). If there’s a fear of being publicly ridiculed with a bland bag of corn chips, it probably looks something like Doritos’ “No Choice” campaign.

What’s the lesson here? Emotion is your friend as an advanced marketer. What do you want your prospects to feel?

Some product tie-ins just write themselves. If you’ve followed along with Netflix’s political drama “House of Cards,” you know Frank and Claire Underwood bear more than a slight resemblance to some very real politicians in our world.

In its own bout of election fever-fueled product promotion, Netflix has gone so far as to launch a fake website for Frank Underwood (with tongue firmly in cheek, it’s called “F.U. 2016”), along with advertisements in (among other places) Greenville, South Carolina, which hosted one of the infamous Republican Presidential debates.

This sort of “alternate reality” tomfoolery has been used to great effect by the likes of Nine Inch Nails, Halo 2 and many others, and has a tendency to make blatant advertisement a bit more palatable for the public, as it shifts the focus away from “traditional” media outlets toward more “thoughtful,” out-of-the-box experiences.

For the advanced content marketer, this Netflix promotion is a bit of a dream come true. Some of the most memorable campaigns we’ve seen involved multiple mediums or so-called “second-screen” viewing. Netflix hit it out of the park here, since its “product” (“House of Cards”) seems to literally reach out of the idiot box and right into our world.

Come to think of it, it’s just like Frank Underwood breaking the fourth wall to address his audience directly.

Craft breweries have become quintessentially American. At a time when more US beer drinkers seem to be eschewing mass-produced beers in favor of seasonal or regional fare, it makes a lot of sense that a homegrown American brewery would be taking an interest in the election.

Half Moon Bay Brewing Company, based in California, is running a promotion where customers can drop by their location and cast their ballot in an unofficial, election-style poll. Right now, Hillary is in the lead, with 59% of the vote. Have you voted yet?

In addition to casting your ballot, you can also pick up an “Alection”-themed six-pack featuring portraits of the candidates with either red or blue labels.

As an added bonus, Half Moon Bay has also pledged $1 from every bottle sold to the Common Cause voter protection fund. It’s a classic win-win and helps drum up more awareness of the impending election, to boot. It’s one thing — and quite useful, as well — to help raise the public’s consciousness about the importance of voting, but it’s another thing entirely to make a tangible contribution to efforts seeking to make the election process fairer and safer overall.

This is a multi-layered promotion, and it really hits it out of the proverbial park. Not only is Half Moon Bay tapping into election fever, but it is also contributing to a cause that should be near and dear to Americans: election fairness. Here’s hoping more content marketers figure out how to combine self-promotion with charitable endeavors.

2016’s Presidential debate between Clinton and Trump was the most-watched debate in American history, meaning many voters don’t need a reminder to tune in. Nevertheless, election participation has settled into a new low over the last few years, so Giordano’s is doing its part to help raise awareness for the debates — a critical element in a complex and constantly changing election season.

These venerable purveyors of Chicago-style deep dish pizza plan on offering pizzas featuring cheese silhouettes of the two candidates on days when debates are to be held. The pizzas will be available in limited quantities to dine-in guests only, perhaps in an attempt to create a town hall-like atmosphere where people can come together and discuss politics in an enjoyable venue.

It doesn’t hurt to encourage folks to visit brick-and-mortar locations to take advantage of a unique promotion. Cashing in a coupon online is its own kind of thrill, but foot traffic, gathered together in common cause, is something else entirely.

5. JetBlue – Reach Across the Aisle

Bipartisan compromise. Sounds like pie-in-the-sky dreaming, doesn’t it? Actually, make that plane-in-the-sky instead, because that’s exactly what JetBlue did with its own stunt-based election tie-in. JetBlue actually has a history of mounting advertisements that take a page out of the performance art playbook, but this one is truly and satisfyingly symbolic.

Previously, JetBlue encouraged prospective customers to engage in a bit of lighthearted vandalism in New York City, when it put up bus stop ads and encouraged passersby to tear them off. That’s a daring move, isn’t it? The ads promised free airfare and other swag to people bold enough to merely follow the posted directions. And it worked! Of the 181 ads they posted, more than 100 were “defaced” in exchange for free stuff.

For this new, election-themed campaign, JetBlue once again recruited customers to help spread the good word. The airline gave 150 unsuspecting passengers an offer they couldn’t refuse: if they could “reach across the (plane) aisle” and agree on a single destination during their six-hour flight, each and every one of them would be rewarded with free airfare.

Yes — on the face of it, it’s a neat stunt and an obvious play for the traveler’s dollar, but it’s also much more than that: it’s a trenchant reminder that compromise doesn’t have to be a forgotten virtue any longer. As far as ads go, it doesn’t get much more symbolic than that, which means JetBlue is to be commended for coming up with an ad that 1) Encourages participation, 2) Raises awareness of politics and 3) Grabs news headlines all across the ‘net. That’s what’s called a classic win-win-win.

Is it wise to pit candidates against America’s favorite brands? Maybe not, when people are more likely to cast votes for entertainers than for world leaders. It seems we already go to great lengths to “check out” from reality.

But that’s what makes some of the examples above really special: they actually have something to say. More Americans than ever before are holding their brands to higher standards when it comes to civic participation and social engagement. In other words, they’re more likely to give their hard-earned dollars to the company that can make a buck while making a difference.

In fact, as many as 81% of American shoppers indicate they’re willing to make “personal sacrifices” to help address social and environmental issues, and that includes changing brands.

In that light, the above five brands and their promotions are to be applauded. Sure — they’re in it for the bucks, but they also know how to inject a bit of levity, fun, and civic responsibility into an election that’s beginning to feel like it just won’t end.

What do you think of brands playing off the election in their marketing campaigns — brilliant strategy, or overdone? Share your thoughts in the comments below!

Adrienne Erin is a freelance writer and designer who blogs at Design Roast. You can read more of her work on her blog or by following @adrienneerin on Twitter.