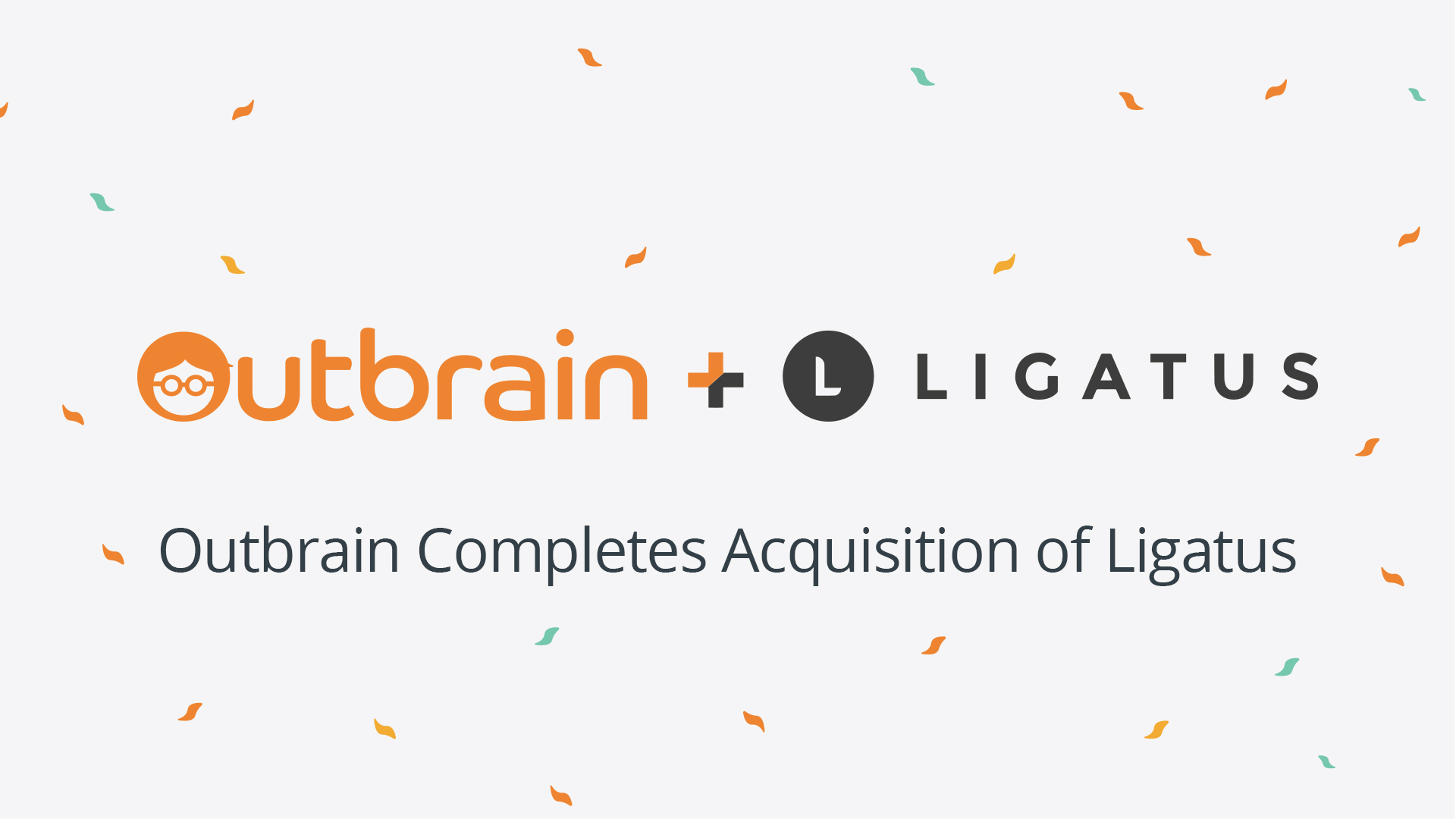 Today we announced the completion of our acquisition of Ligatus, a leading European native advertising platform currently working with many of Europe’s premium publishers. Several of our executive leaders were presenting from our offices in Israel, Germany, France, Italy and Spain to officially bring the company together as one.

This acquisition marks a further step towards Outbrain’s goal of developing its Discovery platform into a comprehensive premium native solution for both advertisers and publishers and continues our strategy of strengthening the group’s capabilities in digital media.

Klaus Ludemann, Ligatus’ CEO, will be joining Outbrain’s executive team as part of the Strategy and Corporate Development Group.

Julien Mosse, Chief Operating Officer for Ligatus will oversee Southern Europe and Benelux as the Managing Director of that region at Outbrain. Mr. Mosse will bring strategic leadership and deep industry knowledge of native advertising to a key growth region. Under his leadership, Outbrain will further expand its European footprint into Belgium and the Netherlands.

Ben Doumen, a seasoned media executive with over 15 years agency experience helped launch Ligatus in Belgium in 2011 and will continue in this role as Managing Director for Outbrain. In the Netherlands, Nick Kalse, who joined Ligatus in 2014 and helped launch the programmatic business for that region, will also continue in his role as Managing Director Netherlands.

François-Xavier Préaut of Outbrain has been promoted to Managing Director for France. Mr. Préaut joined Outbrain in 2012 to open the first Outbrain office in France and has had a pivotal leadership role in his capacity as Head of Sales for France and more recently Regional Director of Sales for Southern Europe since 2016.

Sebastiano Cappa, from Ligatus will continue as Managing Director for Italy. Mr. Cappa joined Ligatus in 2013 as a Sales Director where he opened and directed the Milan office and managed a team focused on partner engagement for native advertising.

Lutz Emmerich, Country Manager of Spain for Outbrain will continue in this role. Mr Emmerich, a seasoned tech and media executive, with previous senior roles at companies like Spotify, launched Outbrain’s operations in Spain in 2012.

Liesbeth Mack-de Boer, Managing Director of DACH for Ligatus, will continue in the same role for Outbrain. Mrs Mack-de Boer  brings over 20 years of experience in sales and media, and more recently at Ligatus has been responsible for the strategic expansion of the company’s core business and the programmatic native growth area in Germany, Austria and Switzerland.

Leading this team of seasoned executives will be Alexander Erlmeier, International Managing Director at Outbrain, responsible for all international markets across APAC, EMEA, and LATAM. “All these newly formed leadership roles will ensure Outbrain is a strong and strategic player in native advertising for the European market, further accelerate year on year growth, and solidify their excellence in Native and Programmatic,” said Alexander Erlmeier.

Mr. Erlmeier joined Outbrain in 2012, and has led the DACH business as Managing Director, Central Europe into a high and sustainable growth market. He also established Outbrain as the market leader in Germany and Austria for native discovery.

Presenting from our office in Cologne, our co-CEO, David Kostman said, “This is a pivotal moment for Outbrain as we have just successfully combined our forces with Ligatus that expands our native offering to marketers and strengthen our relationships with our publisher partners. I have no doubt that our European markets will benefit greatly from the wealth of market experience and leadership of this new executive team. It is truly a new day in Europe for Outbrain and for Native Advertising.”

We congratulate each of our team members who worked tirelessly behind the scenes to help ensure a smooth transition with this acquisition and look forward to a future filled with ongoing success!

Photographed below are our existing and new executive leadership.

Brian Gallagher is a Director of Corporate Communications at Outbrain.