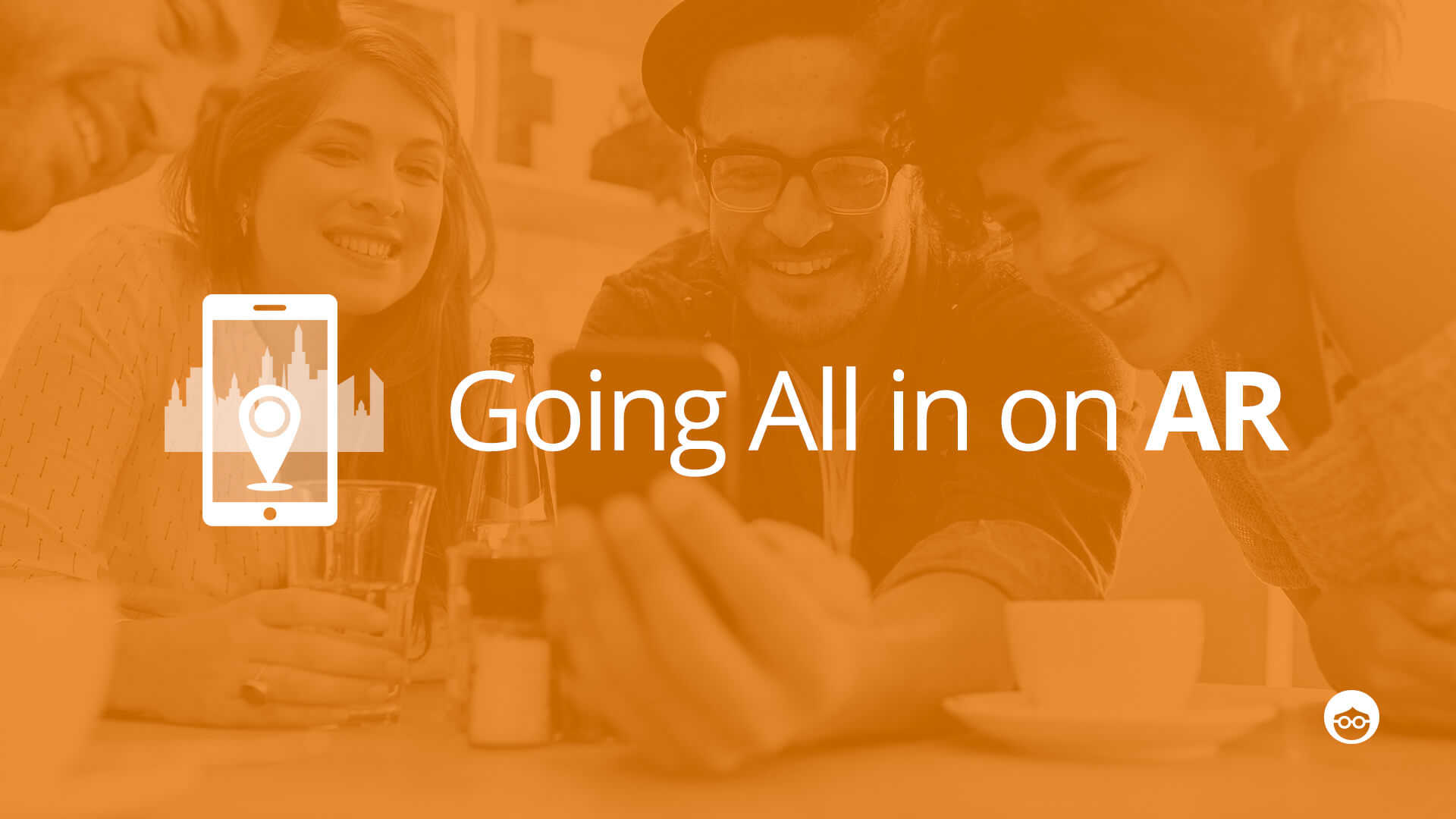 AI and virtual reality are two buzz terms that are frequently talked about these days. But in the constant discussions about the very real ways these advances in technology will affect consumerism, one other bit of tech frequently gets overlooked: augmented reality.

An emerging buzz term in its own right, “AR” is just as noteworthy as artificial intelligence and VR.

Consider that we as marketers have reached something of a breaking point in terms of information delivery. We now have more channels than ever in which to appeal to our target audience.

With social media, vlogs, email, and more, the competition for a brand to hold its audience’s attention is harder than ever. In fact, statistics show that adults are consuming a whopping 10 hours and 39 minutes of media every day.

It’s precisely this information overload that has resulted in human beings’ attention spans becoming shorter than ever.

With an endless media cycle and such a stiff level of competition, brands can no longer afford to appeal to their audience some of the time – they need to be everywhere all of the time.

So which tactic is best? These two-letter buzzwords can be easy to mix up, so let’s define what each of them means. First, AI. While there are a few types of artificial intelligence, simply put, it is “machine learning”. We see it in virtual assistants like Amazon’s Alexa, and in marketing, we see it in helper tools like chatbots. Virtual reality is an immersive computer-generated experience in a simulated environment. It requires a headset, and in marketing, it has a number of applications, including creating virtual showrooms.

Augmented reality, on the other hand, is an interactive experience where the real world is “augmented” by digital technology. Here are five ways AR can be more effective than VR and AI at helping you achieve an omnipresence, and what this tech means for the future of inbound marketing.

At the moment, virtual reality is the belle of the technological ball. There’s a good reason for this: the tech can be applied to a wide range of applications, from gaming to robotics to marketing. It’s why an analysis by Citi predicted VR could be a trillion-dollar industry by 2035. However, even as wieldy as VR is, technologically speaking, AR might just have it beat – especially where it concerns marketing.

Consider the facts: VR excels at digitally recreating a retail showroom and displaying various products, but augmented reality can eliminate competition by placing a single product front and center in the audience’s field of vision. And without the need for a bulky headset, AR can appeal to people in real time, whether they’re on their way to work, sitting on a bus, or walking down the street. All that’s required is a pair of augmented reality glasses.

This is why Facebook is doubling down on AR technology. It’s also why Apple is making AR glasses a cornerstone of its market strategy – and that strategy could lead to a market cap of two trillion dollars by 2025.

It merges technology and reality

The idea of combining the real world with the digital one is a hit with the general public. We have concrete proof of this in the form of a deceptively simple mobile app that had people hunting for monster eggs. Users spent a billion dollars on the Pokémon GO app.

The technology to augment the real world with the digital one hit the general public on a visceral level and sparked their imagination – kind of like a “Who Framed Roger Rabbit” for the 21st century.

Also, consider the “heads up display” feature that comes in many new cars. The HUD digitally projects a vehicle’s speed, GPS routes, and other data, right on the windshield. It was only a matter of time before marketers harnessed this tech and applied it to ecommerce.

Now you can present branded messaging to your audience in the exact same way.

Consider what Pepsi was able to achieve by overlaying images on a bus stop. Creative AR campaigns like this will only become more common as the technology improves and augmented reality glasses become more ubiquitous.

Like with the egg searching that became so popular in Pokémon GO, marketers are now realizing that they can use AR hotspots (landmarks) to direct potential customers where they want them to go.

Sony Music, for example, teamed with mobile marketing firm Landmrk to design an AR-enhanced customer journey directing folks to specific locations. In this case, Sony guided hundreds of people in various countries to landmarks that promised rewards in the form of unlockable content for an upcoming Shakira release.

What’s fueled mass adoption is the “treasure hunt” aspect of mixed reality. As far as marketing is concerned, the sky’s the limit. You can direct your target audience to any hotspot anywhere in the world – provided they’re interested. And if they aren’t, simply tweak your strategy and experiment with rewards until you get those people moving.

Maybe sales at your brick-and-mortar location are flagging – you can use the same principle to compel people to physically visit the store. It’s also a great way to direct traffic to new displays of your products and services, particularly regarding trade shows and other industry events.

One brand that executed this strategy to near perfection is IKEA. In 2017, the Swedish furniture manufacturer with the vowel-heavy product line launched IKEA Place. But this isn’t just any new app. It acts as a virtual extension of their product catalog by allowing customers to scan a room with their Apple devices. They can then virtually insert various IKEA products and rearrange them within the app to see how they might look in the space.

The key, of course, is figuring out how AR fits in with the mobile strategy of your particular brand. There are many ways to implement AR, too, and it all hinges on the software design kit (SDK).

Maybe your app will perform better with the more common smart glasses support. Or perhaps gamification is the goal with your app. In that case, you’ll want support for a supercharged AR game engine like Unity.

There are plenty of other SDKs to consider, including geolocation, 3D tracking, and more.  You can find ideas such as these and lists of AR tools here.

It goes beyond hardware

You can bet that eventually, the need for AR glasses and goggles will be non-existent. Just like you can overlay a “heads up display” on a vehicle windshield, you can overlay digital 3D technology on a smartphone screen.

Certain mobile apps, like Snapchat, are going all in on AR. The mobile messaging giant has taken AR into the browser, offering web content overlaid on images of the physical world.

Regarding commerce, Snapchat has introduced “Shoppable AR” into its platform. It’s a new capability for its AR lens that allows users to promote products, watch videos, and install apps. Marketers can take advantage of this by directing users to the products they sample within the AR lens. It’s set to completely redefine social commerce and how marketers think about social media marketing.

It’s not hyperbolic to suggest that augmented reality will become a game changer in the same way the internet revolutionized information dissemination. With this tech, we’re looking at a tectonic shift, not only in ecommerce, but in the way people fundamentally make their purchase decisions. And marketers will be designing the AR strategies that, when implemented, become the first digital points of contact between consumers and brands.

Those who don’t get on board with this brave new world now, will likely be left behind later.

Ryan is a Vice President of Strategy and Marketing Services Elevation Marketing. As a strategic marketing and branding expert, Ryan helps Elevation’s clients solve their problems and achieve their business goals through integrated marketing solutions distinguished by research, storytelling, engagement, and conversion. With a proven track record of energizing brands, and having worked with a variety of Fortune 500 companies, Ryan is a respected expert in achieving consistent results through creative design, thought-provoking narratives, and innovative problem-solving.