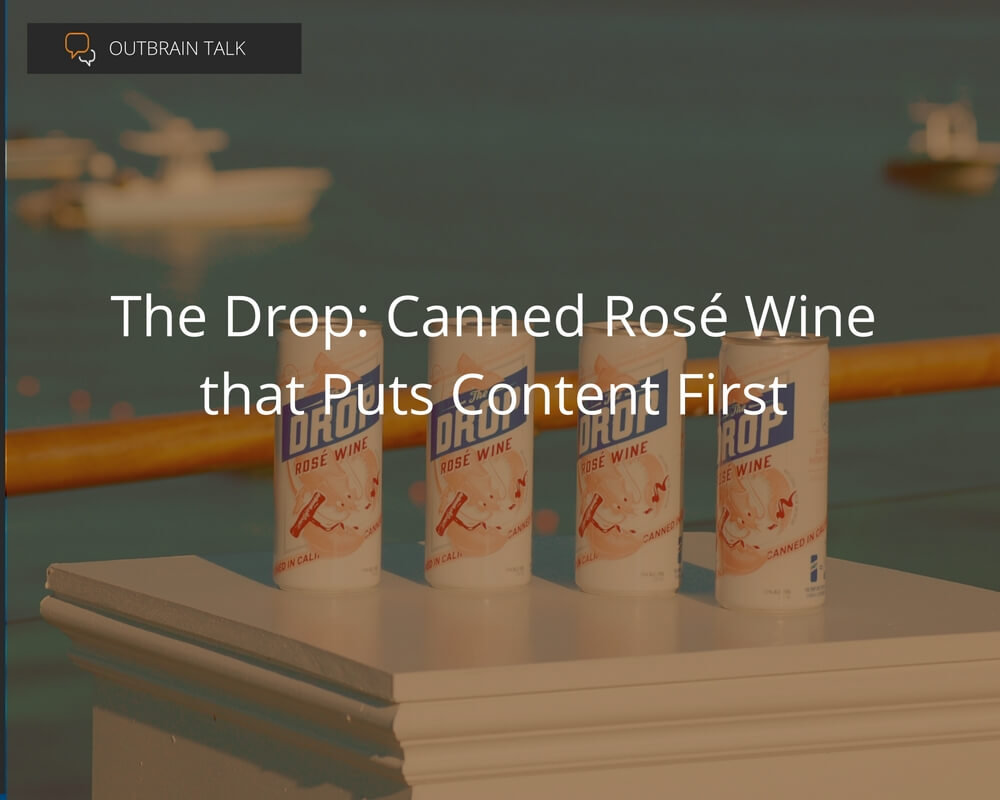 Any content marketer who has ever worked on an alcohol brand knows two things: they allow you to play in all kinds of fun lifestyle content areas and, oh right… there’s the dreaded “age gate.” Drive anyone to your website and expect automatic drop-off, due to the age verification process that the law requires a user to complete before viewing web content.

This is something Alexis Beechen, one of the co-founders of new canned rosé wine company, The Drop, knows very well. She cut her teeth as an account manager for Dos Equis, before starting up her disruptive new brand targeted at men and women, 23-35. So far, after launching in April with a soon-to-be sold out first run and 250MM unpaid media impressions within 12 weeks of launch, she’s definitely doing something right.

How the Idea Became a Reality

While traveling in Greece with some of her friends, Beechen noticed that her male friends were reluctant to drink wine, opting instead for beer and spirits. She wondered why and if there was a white space to disrupt change. That observation led to more research into the industry.

Unlike beer or spirits, she found that the wine industry was highly fragmented. The majority of people in the wine industry were artisans, not marketers. As a result, there was little data from consumers. Moreover, there was no brand affinity, no call-outs at the bar, and no one was following wine brands on Instagram.

She also noticed that rosé was experiencing a renaissance and canned wine, in particular, was an up-and-coming segment. Indeed, as of today, while still just a paltry 1% of the overall wine market in the U.S., canned wine sales are up 125% over the past year.

As Beechen continued to figure out the complicated production details to make her product a reality, she decided to just run with it by launching the Instagram channel @Thatroselife.

For those first 10 months, she used Instagram to develop the Drop’s brand voice, test content, and build credibility in the rosé world.

Beechen admits that she was reluctant about announcing the brand to her Instagram community, as she questioned whether they’d accept the shift from a lifestyle account to product. However, she was thrilled when her audience showed so much immediate enthusiasm for the brand and continued to respond to the voice after the product was introduced.

In fact, she attributes her loyal social media audience to a lot of early success, citing that many fans discovered the product on Instagram and demanded retailers carry the product. 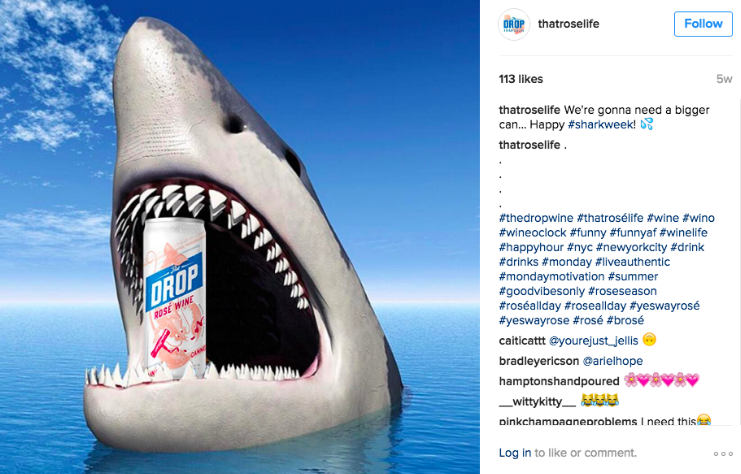 More recently, she attributes The Drop’s huge growth to all the earned media generated since launch. With packaged wine being the largest growing segment and the battle of the old wine guard vs. the new guard, there’s been a lot of organic interest and excitement in the company. She explains that this has been huge for them, as media like banner ads don’t really help when you have an age-gate and fragmented distribution.

The e-newsletter has been another important content touchpoint for the brand. Beechen explains that it is a great way to catch users who sign up through events or who have made it past the website age-gate. Beechen explains that here, she looked to tech brands and e-commerce brands as much as possible for inspiration. With most alcohol brands, there’s nothing about capturing emails — the supplier never gets to be in contact with the end buyer. However, as soon as you get to The Drop website, you get a CTA to ask for an email.

She says that they’ve tried to keep the e-newsletter as entertaining as possible, with a balance of about ¼ the product and ¾ the lifestyle and world. Beechen remains adamant about entertaining her users, rather than pushing them with product. “You can’t send an email out and expect it to be all about you.”

Grassroot events have also been another big push for the brand. All gimmicks aside, the team really believes in the quality of their product and feels strongly that people need to try it. Sponsorship and events like the recent one with WeWork Summer Camp, which features live performances and outdoor events are a great way to get to know and love the wine.

So what’s next for The Drop? Expect a new canned red available in October. Beechen explains they’re doing focus groups right now on the new red product, something that isn’t really done in the wine world. However, by avoiding any pigeon-holes into a grape varietal or a specific region, she hopes The Drop won’t be dragged down by the traditional economics of a wine brand. The goal is to invest more in the things that consumers care about.

So, in summary, expect more controversy – and media coverage – ahead.