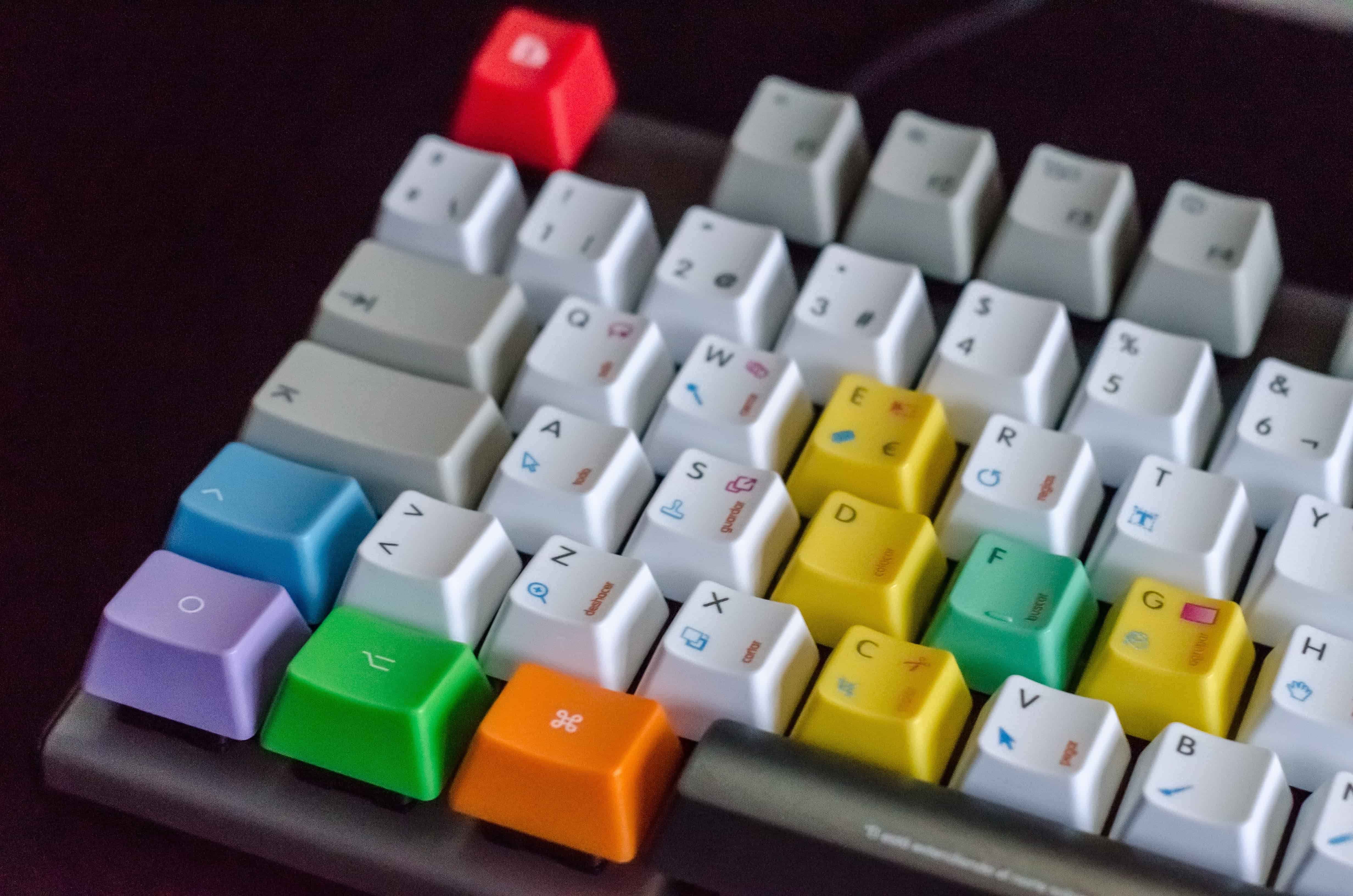 Photo by Juan Gomez on Unsplash

“Keep a developer learning and they’ll be happy working in a windowless basement eating stale food pushed through a slot in the door. And they’ll never ask for a raise.” — Rob Walling (https://robwalling.com/2006/10/31/nine-things-developers-want-more-than-money/)

The past decade has produced substantial research verifying what may come as no surprise: developers want to have fun. While we also need our salaries, salaries alone will not incentivize us developers who, in most cases, entered a field to do what we love: engage in problem-solving. We like competition. We like winning. We like getting prizes for winning. To be productive, we need job satisfaction. And job satisfaction can be achieved only if we get to have fun using the skills we were hired to use.

We wanted to keep the backend developers challenged and entertained.
That’s why Guy Kobrinsky and I created our own version of Haggling, whose basic idea we adapted from Hola, a negotiation game.

Haggling consists of rounds of negotiations between pairs of players. Each pair’s goal is to maximize score in the following manner:

Let’s say there are a sunglasses, two tickets, and three cups on the table. Both players have to agree on how to split these objects between them. To one, the sunglasses may be worth $4, a ball $2, and the tickets are worthless. The opponent might value the same objects differently; while the total worth of all the objects is the same for both players, their valuation kept secret

Both players take turns making offers to each other about how to split the goods. A proposed split must distribute all objects between partners such that no items are left on the table. On each turn, one can either accept an offer or make a counter-offer. If after 9 offers an agreement is reached, every player receives the amount that its portion of the goods is worth, according to the assigned values. If there is still no agreement after the last turn, both players receive no points.

The Object of the Game:

Write code to obtain a collection of items with the highest value by negotiating items with an opponent player.

We wanted it to be as easy as possible for players to submit, play and test their code.
Therefore, we decided to keep player code simple – not relying on any third-party libraries.
To do this, we built a simple web application for testing and submitting code, supplying a placeholder with the method “accept” – the code that needs to be implemented by the different participants. The “accept” method describes a single iteration within the negotiation, in which each player must decide if they will accept the offer given to them (by returning null or the received offer) – or return a counter offer.

To assist in verifying the players’ strategy, we added a testing feature allowing players to run their code vs some random player.  Developers were able to play around with it, re-implementing the code before actual submission.

Test Your Code and Submit Online:

Practice tournaments ran continuously for two weeks, taking all submitted players into account and allowing developers to see their rank. During this time, competitors were able edit their code. So there was plenty of time to learn and improve.

We also provided analytics for every player. Developers were able to analyze and improve their strategy.

We executed the game tournament using multiple agents – each of the agents was reported to Kibana: 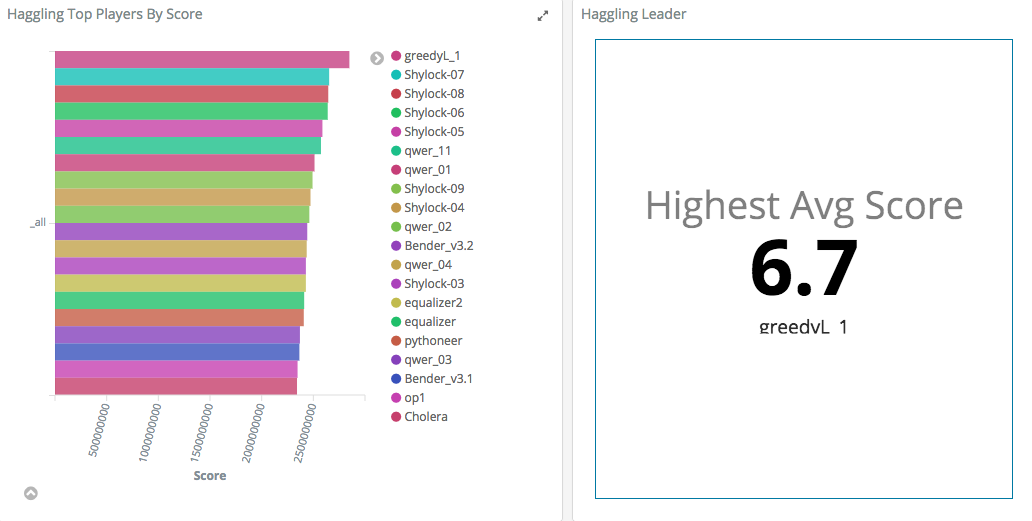 Where did we store players’ code?
We decided to store all players’ code in S3 of AWS to avoid revealing the code to other players.

What languages were supported?

We started with Java only, but players expressed interest in using Scala and Kotlin as well. So we gave these developers free rein to add support for those languages, which we then reviewed before integrating into the base code. Ultimately, developers were able to play in all three languages.

What was the scale of Haggling?

In the final tournament, 91 players competed in 164 million rounds in which 1.14 billion “accepts” were called. The tournament was executed on 45 servers, having 360 cores and using 225G of memory.

The greatest advantage of our approach was our decision to use Kubernetes, enabling us to add more nodes, as well as tune their cores and memory requirements. Needless to say, it was no problem to get rid of all these machines when the game period ended.

How did the tournament progress?

The tournament was tense, and we saw a lot of interaction with the game over the two weeks.
The player in the winning position changed every day, and the final winner was not apparent until very near the end (and even then we were surprised!).
We saw a variety of single-player strategies with sophisticated calculations and different approaches to gameplay.
Moreover, in contrast to the original game, we allowed gangs: groups of players belonging to a single team that can “help” each other to win.

So how do you win at haggling?

The winning strategy was collaborative – the winning team created two types of players: the “Overlord” which played to win, and several “Minions” whose job was to give points to the Overlord while blocking other players.  The Overlord and Minions recognized each other using a triple handshake protocol, based on mathematical calculations of the game parameters.  Beyond this, the team employed a human psychological strategy – hiding the strength of the Overlord by ensuring that for the majority of the development period the Overlord went no higher than third place.  They populated the game with “sleeper cells” – players with basic strategies ready to turn into minions at the right moment.  The upheaval occurred in the final hour of the game when all sleepers were converted to minions.

The graph shows the number of commits in the last hour before the code freeze:

Hats Off to the Hacker: who got the better of us?

During the two weeks, we noticed multiple hacking attempts. The hacker’s intent was not to crash the game, but rather to prove that it is possible and make a lesson of it.
Although it was not our initial intent, we decided to make hacking part of the challenge and to reward the hacker for demonstrated skills and creativity.

On the morning of November 7th, we arrived at the office and were faced with the following graph of the outcomes:

The game had been hacked! As can be seen in the graph, one player was achieving an impossible success rate. What we discovered was the following: the read-only hash map that we provided as method argument to players was written in Kotlin; but, when players converted the map to play in either Java or Scala, the resulting conversion rendered a mutable hash map, and this is how one of the players was able to modify the hash map. We had failed to validate the preferences, ensuring that the hashmap values that players turned in used the same values as the original.

In conclusion, This is exactly the sort of sandbox experience, however, that makes us better, safer, and smarter developers. We embraced the challenge.

Want to play with us? Join Outbrain and challenge yourself. 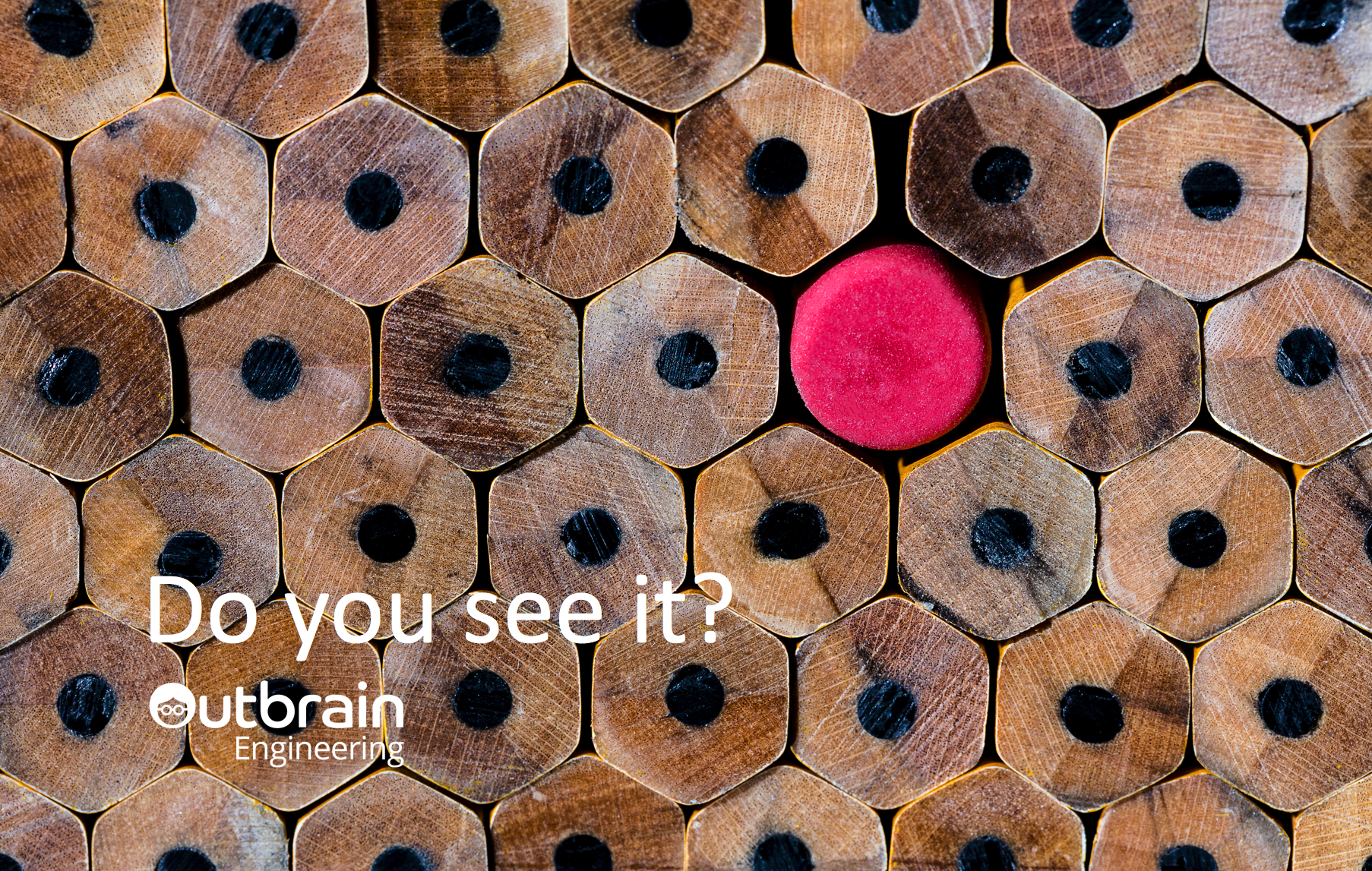