Nearly every large-scale system becomes distributed at some point: a collection of many instances and services that compose the solution you provide. And as you scale horizontally to provide high availability, better load distribution, etc…, you find yourself spinning up multiple instances of services, or using systems that function in a clustered architecture. That’s all cool in theory, but soon after you ask yourself, “how do I manage all of this? How should these services communicate with each other? And how do they even know what instances (or machines) exist?”

Those are excellent questions!

What methods are in use today?

The naive approach, which we’d followed in Outbrain for many years, is to route all inter-service traffic via load balancers (HAProxy in our case). Every call to another system, such as a MySql slave, is done to the load balancer (one in a pool of many), via an agreed upon name, such as a DNS CNAME. The load balancer, which holds a static configuration of all the different services and their instances, directs the call to one of those instances, based on the predefined policy.

The load balancer is also responsible for checking service health, to make sure requests are routed only to live services, as dead ones are “kicked out of the pool”, and revived ones are brought back in.

An alternative to the load balancer method, used in high throughput systems such as Cassandra, is configuring CNAMEs that point to specific nodes in the cluster. We then use those CNAMES in the consuming applications’s configuration. The client is then responsible to activate a policy of balancing between those nodes, both for load and availability.

OK, so what’s the problem here?

What this all adds up to is “the end of the static configuration era”. Goodbye static configs, hello Dynamic Service Discovery! And cue Consul.

In a nutshell, Consul is a Service Discovery System, with a few interesting features:

How does Consul work?

You can read all about it here, but let me take you through a quick tour of the architecture: 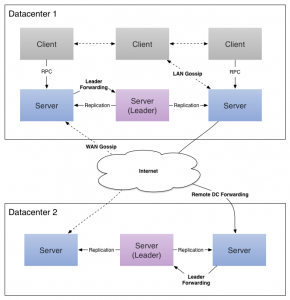 As you can see, Consul has multi-datacenter awareness built right in (you can read more about it here). But for our case, let’s keep it simple, and look at the case of a single datacenter (Datacenter 1 in the diagram).

What the diagram tags as “Clients” are actually “Consul agents”, running locally on every participating host. Those talk to each other, as well as the Consul servers (which are “agents” configured as Servers), through a “Gossip protocol”. If you’re familiar with Cassandra, and that rings a bell, then you’re right, it’s the same concept used by Cassandra nodes to find out which ones are up or down in a cluster. A Gossip protocol essentially makes sure “Everybody knows Everything about Everyone”. So within reasonable delay, all agents know (and propagate) state information about other agents. And you just so happen to have an agent running locally on your node, ready to share everything it knows via API, DNS or whatnot. How convenient!

Agents are also the ones performing health checks to the services on the hosts they run on, and gossiping any health state changes. To make this work, every service must expose a means to query its health status, and when registered with its local Consul agent, also register its health check information. At Outbrain we use an HTTP based “SelfTest” endpoint that every one of our homegrown services exposes (through our OB1K container, practically for free!).

Consul servers are also part of the gossip pool and thus propagate state in the cluster. However, they also maintain a quorum and elect a leader, who receives all updates (via RPC calls forwarded from the other servers) and registers them in it’s database. From here on, the data is replicated to the other servers and propagated to all the agents via Gossip. This method is a bit different from other Gossip based systems that have no servers and leaders, but it allows the system to support stronger consistency models.

There’s also a distributed key-value store we haven’t mentioned, rich ACLs, and a whole ecosystem of supporting and derived tools… but we said we’d keep it simple for now.

Where does that help with service discovery?

First, what we’ve done is taken all of our systems already organized in clusters and registered them with Consul. Systems such as Kafka, Zookeeper, Cassandra and others. This allows us to select a live service node from a cluster, simply by calling a hostname through the Consul DNS interface. For example, take Graphite: Outbrain’s systems are currently generating ~4M metrics per minute. Getting all of these metrics through a load balancer, or even a cluster of LBs, would be suboptimal, to say the least. Consul allows us to have each host send metrics to a hostname, such as “graphite.service.consul”, which returns a random IP of a live graphite relay node. Want to add a couple more nodes to share the load? no problem, just register them with Consul and they automagically appear in the list the next time a client resolves that hostname. Which, as we mentioned, happens quite a few times a minute. No load balancers in the way to serve as choke points, no editing of static config files. Just simple, fast, out-of-band communication.

How do these 3rd party services register?

We’re heavy users of Chef, and have thus created a chef cookbook to help us get the job done. Here’s a (simplified) code sample we use to register Graphite servers:

How to do clients consume services?

Clients simply resolve the DNS record they’re interested in… and that’s it. Consul takes care of all the rest, including randomizing the results.

How does this data reach the DNS?

We’ve chosen to place Consul “behind” our internal DNS servers, and forward all requests for the “consul” domain name to a consul agent running on the DNS servers.

Note that there’s other ways to go about this, such as routing all DNS requests to the local Consul agent running on each node, and having it forward everything “non-Consul” to your DNS servers. There’s advantages and disadvantages to each approach. For our current needs, having an agent sit behind the DNS servers works quite well.

Where does the Consul implementation at Outbrain stand now?

And our roadmap for the near future:

But that’s not all! stay tuned for more on Consul, client-side load balancing, and making your environment more dynamic.