Earlier this week, a handful of Outbrainers headed to Austin, Texas for the yearly nerd retreat known as South by Southwest Interactive. While they may have had a bit too much fun, they also tackled the conference with gusto in order to report back on the latest trends and technologies to keep an eye on this year. Now that they’ve once again replaced their temporary cowboy hats with suave business causal, here are some key takeways for what they saw this year at the conference.

Where Is Everyone?: Location-Based Apps and Group Messaging Are All the Rage

Unsurprisingly, it was all about mobile, mobile, mobile — both for the attendees themselves (burying their faces into their iPhones or Androids to find out which panels are bombing on Twitter) and for the general buzz around the conference center about the hot new startups on the scene, most of which were mobile-focused. As the WSJ so perfectly reported, “looking down is the new looking up.”

Specific location-based apps and group messaging startups were key players of SXSWi, not only in their massive presences and parties, but also for keeping conference-goers connected. Outbrain’s Cortland Connell (brand and agency sales) listed newbies such as GroupMe and Hashable within his top picks, seconded by product dude Dave Kilsheimer who described the services as “indispensable for organizing and communicating in the typically bandwidth-starved environs around the convention center.” But let’s also not forget about the old guys on the block, Foursquare, who as Dave noted “came into its own with a brand new version and business model” with their version 3.0 release.  Outbrainer opinions aside, these apps also received their fair share of chatter among the larger audience.

Brands Thinking About the Bigger Picture

In terms of larger trends, “one of the things that I found most interesting is the idea around brands needing to think about the bigger picture of what their brand stands for instead of what products they are selling. RG/A did an entire session around this and discussed the notion of Barnes and Noble switching from being about books to being about reading” recalls Outbrain marketing VP Lisa LaCour.  Blake Mycoskie of TOMS echoed the same sentiment in his keynote talk that it’s not just about shoes for his company — it’s about “one for one” which allows him think about the bigger idea of giving and opens the opportunity for more products beyond shoes. Incidentally, the company will unveil a new product in June.

Content marketing was also a hot topic on the panel front with many devoted to content creation and the relationship of brands taking on new online publisher roles as a part of their marketing strategies.In a session titled Brave New World: Debating Brands’ Role as Publishers, tensions were high as Joe Pulizzi from the Content Marketing Institute and TechCrunch reporter Lora Kolodny staunchly disagreed about brand-created content. According to Pulizzi, content is the key way for brands to connect with their customers with 25% of marketing budgets dedicated to content. Kolodny questioned the validity of content coming from brands, claiming that brands will only publish what they want customers to know and that the content therefore should instead have some sort of unbiased representation. To that point, another panelist asked if [they] should give customers some credit and give them an opportunity to make their own choices on what they want to believe? Something tells me that this topic wasn’t resolved in the short time of their panel, so here’s a cool visual representation of the talk by Ogilvy instead: 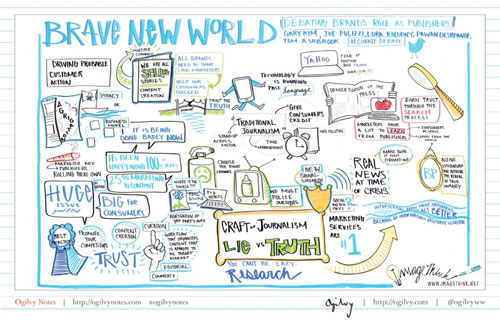 On a different panel entitled Content Rules, Lisa also noticed that many attendees are also creating content (in line with Pulizzi’s sentiments) but are having trouble finding a scalable audience. Boy, do we have a solution for you. Call us 🙂

Did you attend the conference? What were your main takeaways? Tell us in the comments. 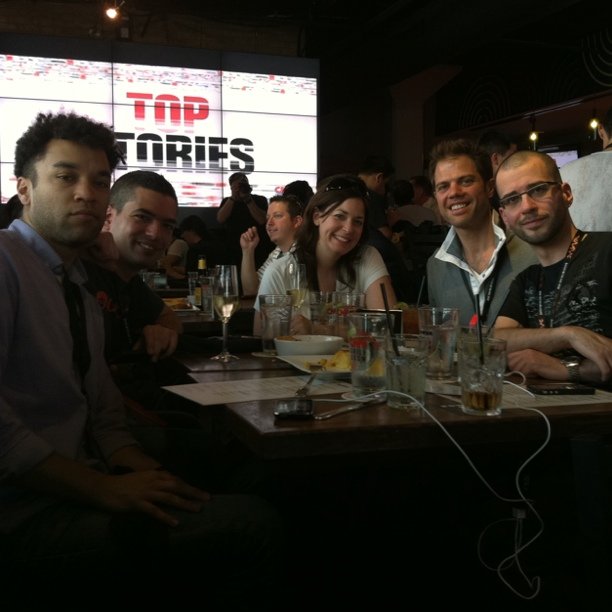 Kelly is Senior Marketing Manager at Outbrain. Previously, she was the founding editor of Urlesque, an AOL-owned website covering internet trends, web humor and viral media. She is passionate about great content, the next big thing, internet memes and cats.