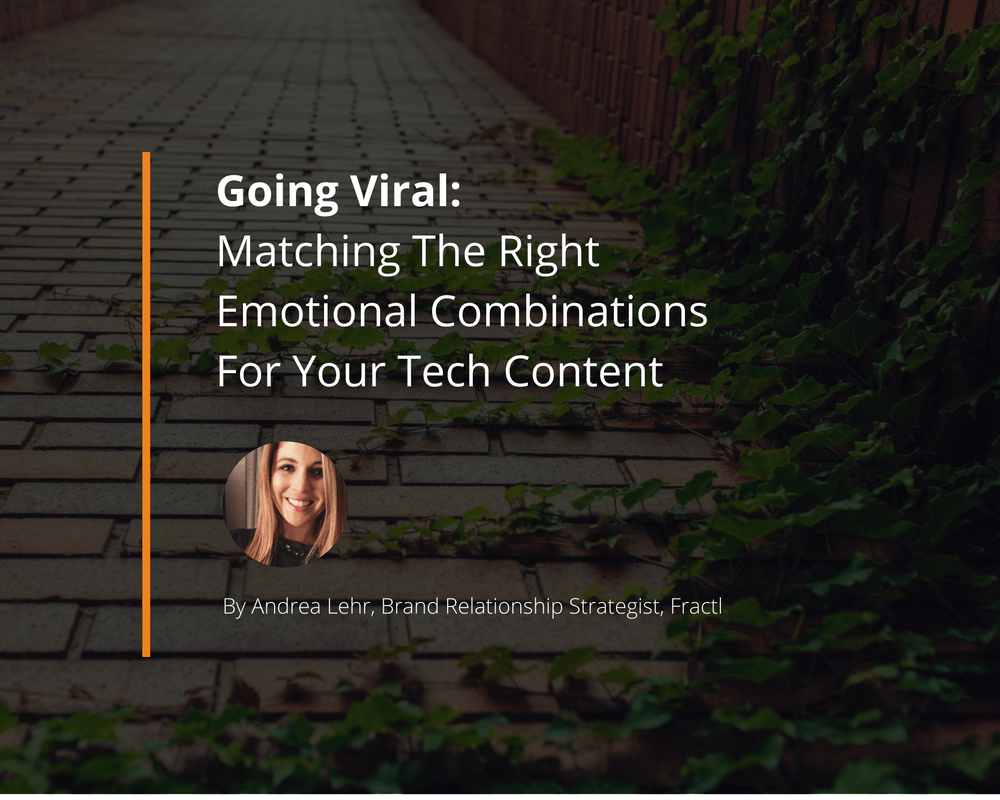 What makes a story go viral?

More importantly, what makes something go viral within my industry?

These are the questions content marketers face on a daily basis, and if you’re in the tech industry, the competition is incredibly fierce: According to the Content Marketing Institute, a whopping 95 percent of technology marketers are engaged in content marketing.

So if you want to get your brand name out there, a viral hit is a must – but is there a go-to code or framework for something that seems so random?

The Research Behind Virality

Previous research links virality to high-arousal emotions, but new research argues that more emotional dimensions than arousal are at work – specifically dominance, or an individual’s sense of control.

After reviewing 65,000 articles from two news sites, researchers Jacopo Staiano of Sorbonne University and Marco Guerini of Trento Rise discovered that arousal and dominance play different roles in which emotions compel us to share. High dominance, for instance, is closely tied to higher social shares
while higher arousal is more closely connected to commenting.

Since variations in these configurations influence our reaction to content differently, my team at Fractl decided to take a closer look at the emotional responses are triggered as a result of varying levels of arousal and dominance.

Using the Pleasure-Arousal-Dominance (PAD) model, we analyzed the emotional responses to the top images from Reddit’s r/pics community and discovered that there are three ideal emotional combinations for viral content

Here I’ll walk you through three key insights technology marketers should keep in mind when outlining their next campaign.

It didn’t take long for us to notice that positivity is a key element in a majority of viral content, as visualized in the top 10 list below:

In terms of arousal and dominance, both levels were incredibly high when positive emotions like admiration, happiness, and love were triggered, and a great example of this in action is Intel’s “Meet the Makers” campaign.

The video features 8th-grader Shubham Banerjee, who invented a less expensive Braille printer that was brought to life thanks to help from an Intel processor. It’s an incredible story that ignites a genuine sense of admiration in its audience because of who Banerjee is helping and why he was inspired to do something – and this helped the clip earn more than one million views on YouTube:

Brands should focus more on telling the human side of a story. Intel’s decision to replace more technical discussions on innovation with a heartfelt story is what helped drive social shares.

Insight #2: Surprise is a common element in viral content.

Another popular viral configuration – high arousal and low dominance – always generated feelings of surprise, and IBM capitalized on this preference for the unexpected in its “Bob Dylan & Watson on Language” video.

The songwriter has a chat with IBM’s know-it-all computer, Watson, about his songs over the years. The element of surprise? Like all wannabes, the computer tries to impress Dylan with his own musical creation – which prompts Dylan to walk out. The back-and-forth between this unexpected duo helped the video generate more than three million YouTube views

An element of surprise is an easy addition to any technology campaign. Whether it’s spotlighting an unusual invention or featuring someone that’s typically not associated with the highly-niche vertical, the possibilities are endless.

The final viral configuration included low levels of both arousal and dominance, and our results revealed that this was the only combination that could produce a purely negative response – so long as it featured something surprising.

Consider Microsoft’s “Scroogled” video. The software giant attacked Google, asserting that Gmail’s ability to sift through every email was more harmful to its users than using Outlook. The campaign received a ton of negative coverage, but whether or not a consumer agreed with Microsoft, it’s name was out there – and at high levels:

Competitive ads like this one are some of the most successful negative campaigns technology brands can run (think Mac vs. PC).

Whether your content is positive or negative, make sure you surprise your audience.

Although the competition is high in an incredibly niche vertical like technology, research continues to prove that there’s a code to unlocking your campaign’s viral potential.

All it takes is engaging content that generates a highly emotional experience – ideally in an unexpected way.

Andrea Lehr is a Brand Relationship Strategist at Fractl where she works alongside a team of creative strategists to produce unique, data-driven campaigns about industry trends. When she’s not in the office, there’s a good chance you’ll find her running or challenging friends to a game of trivia.